Presenting Audio Albion, another compilation from ever-redoubtable A Year In The Country and perhaps their finest release to date. Featuring an exclusive Howlround track made entirely from the sounds of a kissing gate recorded somewhere out in the wilds by a well-wisher. This well-wishing then lead to ‘Cold Kissing’. Will I ever get tired of using gates as source material? I hardly think so, every gate is as unique as a snowflake – and if the results continue to be as rewarding as this, why would you ever apply WD-40? Also includes 14 tracks by some of the most interesting artists currently working in this field (pun very much intended). Further details below…

From the sleevenotes: Audio Albion is a music and field recording map of Britain, which focuses on rural and edgeland areas. Each track contains field recordings from locations throughout the land and is accompanied by notes on the recordings by the contributors. The tracks record the sounds found and heard when wandering down pathways, over fields, through marshes, alongside rivers, down into caves and caverns, climbing hills, along coastlands, through remote mountain forestland, amongst the signs of industry and infrastructure and its discarded debris.

Intertwined with the literal recording of locations, the album explores the history, myths and beliefs of the places, their atmospheres and undercurrents, personal and cultural connections – the layered stories that lie amongst, alongside and beneath the earth, plants and wildlife. Featuring work by Bare Bones, David Colohan, Grey Frequency, Field Lines Cartographer, Howlround, A Year In The Country, Keith Seatman, Magpahi, Sproatly Smith, Widow’s Weeds, Time Attendant, Spaceship, Pulselovers, The Heartwood Institute and Vic Mars.

On a similar note, the Howlround track ‘Night Call, Collect’ from A Year In The Country’s 2017 release The Quietened Cosmologists is now soundtracking this rather super short instagram video shot in Alaska by long-time Fog Friend allstaticmist. Be sure to follow this Portland-based artist on Instagram and Twitter, his photostream is amazing. I’m also hoping he might treat us with a new album at some point, but one thing at a time…

Through the Inside Passage, picking out my future lighthouse home. Music by Howlround • Night Call, Collect. Used with permission by my soul brother, @robinthefog.

Hello You. It’s been a little quiet on these pages for the last couple of weeks, largely due to an increased amount of offline activity that has been keeping me exceptionally busy and stimulated. Since I last wrote I’ve been off making recordings in Slovakia and Hungary (plus Brighton) and next week I’m off to Stockholm. While this has all fallen under the ‘sensible work’ umbrella, it’s been tremendous fun, but hasn’t allowed me any time at all to take the machines out for a spin – a shame as we were enjoying an agreeably noisy purple patch. However, we’re back in action this forthcoming Sunday, as myself and director Steven McInerney will be presenting another live score of A Creak In Time as part of the 2018 Splice Festival. Joining us on the bill will be a Mechanical Techno set from the ever-redoubtable Graham Dunning and more eye+ear-popping psychedelic delights from HARMERGEDDON – plus an impressive programme of screenings from the likes of Max Hattler and The Designers Republic. A fantastic line-up and one I’m very chuffed to be part of – see you there! 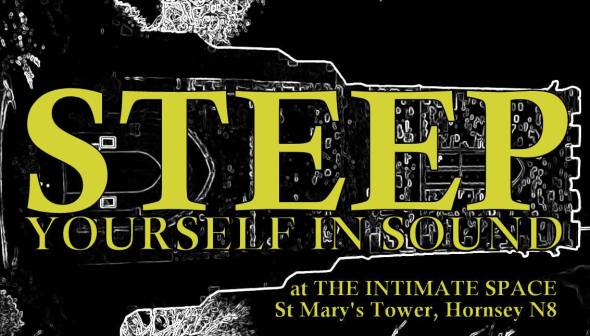 Looking further ahead into the month, I’m also very pleased to announce that Howlround will be unveiling a brand new and exclusive composition at The Intimate Space, a tiny venue located inside the historic St. Mary’s Church Tower in Hornsey, a Grade II listed structure and all that remains of the original medieval church. This event, the second in the STEEP series curated for the space by Sam Enthoven, will also feature Greta Pistaceci performing ‘Stillness’ for two or more theremins/thereminists, accompanied by Charlie Draper and Alina Davies as well as Sam himself. Tickets are extremely limited as you might expect for such an enclosed space (not to mention the fact that it’s the oldest surviving structure in Harringay), so you’re advised to book early. It will be yet another remarkable building to tick off the Howlround bucket list! How many churches and chapels have we done now? I’ve rather lost count! 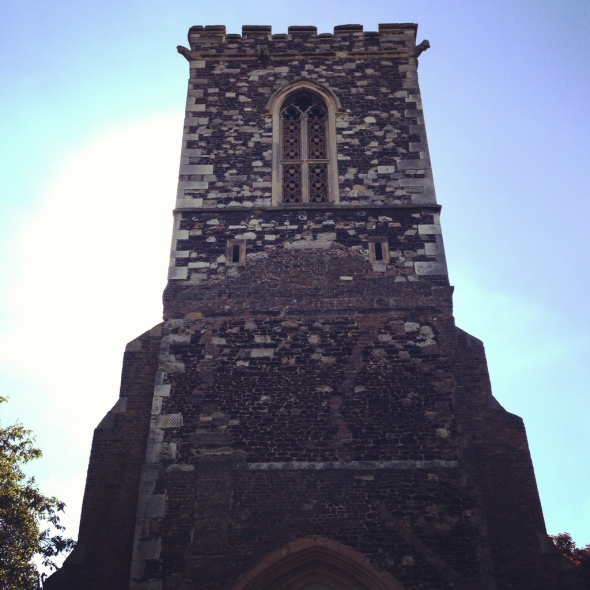 However, this latest act of ‘pew warming’ inside a sacred and holy establishment will be subsequently followed by a predictable fall from grace the following evening as Howlround head over to The Devil Has A Hold On The Land, an all-day festival taking place at Bones & Pearl on Sunday May 27th. The machines and I will be engaging in a one-off soundclash with our old sparring partner and Front And Follow labelmate Time Attendant, part of a rather stunning line up curated by The Band Of Holy Joy and masterminded by their charismatic frontman Johny Brown. You can read an interview with Johny and hear his hand-picked selection of favourite tracks from the artists involved over on the Velvet Sheep blog and tickets can be purchased here. 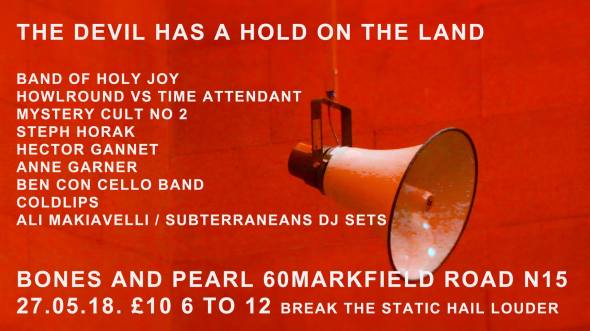 (I was about to add an observation that perhaps the Devil really does have all the best tunes, but I just couldn’t bring myself to do so.)

Speaking of Time Attendant, check out Psychological Strategy Board, his duo with Jonny Maybury and their recently released original soundtrack to the film Penny Slinger: Out Of The Shadows on the Front And Follow label. Full of crepuscular drones and itching electronics, it’s the perfect accompaniment to Richard Kovitch’s documentary on this remarkable British artist. Read more and stream online over at The Quietus and purchase the limited vinyl here or from all good record shops. And probably some bad ones too. The film itself is also throughly worthy of your attention if you can get hold of it… 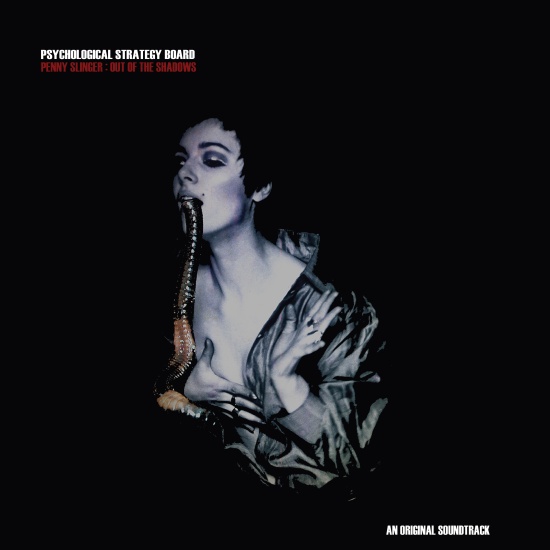