Lambeth and Guildford, Tooth And Claw, Present And Continuous

Hello you. Busy weekend lined up for Howlround as the machines head out on the road for our first pair of live dates this year. First up is a Touch Presents… evening at Iklectik in Lambeth North, a welcome return to everyone’s favourite former Buddhist monastery in support of fellow signings UnicaZürn. We last played together at SuperNormal festival back in 2017 and I can vouch that their live shows are something of a spectacle!

The following day I’m heading to Guildford for the 2nd Moog Symposium, hosted by the University of Surrey’s Institute of Sound Recording and rescheduled from last year. The second day of a weekend of talks and performances in memory of Peter ‘Sleazy’ Christopherson, the day-long programme includes talks from David Stubbs, Richard Norris and David Ball of The Grid and culminates with live performances from Howlround and Important Records’ legend Eleh, an artist who needs absolutely no introduction. Rumour has it that a second release for Touch is in the pipeline, following 2010’s Location Momentum, but no details are present at the moment. Anyway, it’s an excellent line-up and should make for a most stimulating day. Further information and limited tickets are available here. 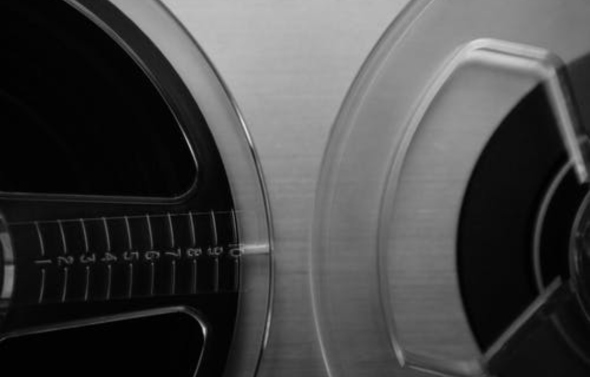 Grateful thanks must go to esteemed blog [The Present Continuous] for including Howlround in a recent lengthy article exploring modern trends in tape music, alongside such giants of the scene as Hainbach, Amulets and of course the great William Basinski. A fascinating primer on the subject and highly recommended reading. I’m most flattered to be included in such company, of course, although I must admit I had never realised that new Howlround album The Debatable Lands contained such things as ‘whimsical in-jokes’! That album is of course now available both online and from all good record shops, so feel free to order yourself a copy and see if you can spot them. Anyway, a doff of the cap to Mr. Daniel Williams for a fascinating read.

And finally, some brand new tape music can be heard adding additional atmosphere to the recent Radio 4 documentary In Tooth And Claw, presented by Charles Foster and produced by the great Michael Umney. It’s an investigation into human relationships with the natural world, particularly those of writers and poets, and explores the darkness that so often seems to dwell at the heart of such encounters. Charles teases out the threads of violence – human, animal and ecological – which run through so much nature writing and asks why we find solace and peace in places haunted by competition, destruction and death as the press release would have it – and the soundtrack incorporates field recordings from some of the locations they visit, sounds of wind and water threaded through the machines and subjected to a modicum of violence themselves. It’s a compelling listen, so click here to tune in.

Hello You. In all honesty, now is probably not the best time to be unveiling my freshly-minted 2018 Retrospective Mixtape, containing some of my very favourite music from the last 12 months. With 2019 now well underway and the majority of goodly folk returned to normality, this second week of January should really be a moment for us all to lift our collective noses to the skyline, bid the old year goodbye and stride purposefully into the future (though in our current climate you could be forgiven for striding purposefully into the nearest cave instead). Unfortunately this time I don’t have much choice as I’ve just spent the last fortnight in bed as sick as a dog, which caused seasonal productivity to take an almighty downward swing. I had hoped to have this mix finished in time for Christmas, but my immune system had some disagreeable festive plans of its own. With this in mind, I ask for you to join me in looking back over the year one last time before we all get on with our lives. Especially as this year’s mix is something of a whopper – a marathon 56 tracks! Pop on the kettle, draw up an armchair and cancel all plans for the next three hours and forty minutes:

A couple of minor disclaimers – it was mixed on a cheap pair of crappy headphones purchased in Brampton Post Office (my own pair having gone walkabout / been eaten by the dog) and as I’m still on my way home following my enforced convalescence in Cumbria, there might be a couple of discrepancies in the track info. All will be double-checked and corrected once I get back to Fog Towers. In the meantime, because Mixcloud seems to be a complete jerk about such things nowadays, here is the tracklisting in full:

Hands-down my favourite album of the year by a country mile was Daphne and Celeste Save The World by Daphne and Celeste with Max Tundra, just in case you’re of the small number of people that I haven’t already bored to death on the subject. Life-affirming, joyous dream-pop that I felt was rather cruelly slept on by press and mainstream broadcasters alike, in an age when so much music feels incredibly dull and homogenous (at least to this grumpy old cynic), this felt like a much-needed shot of mischief. The best pop was always the weirdest, surely? Plus ‘Alarms’ might actually be my favourite music video of all time, even beating that other Max Tundra effort from 2009 where he played battenburg cake as if it were a synthesiser. Order your copy of the album here.

Belated thanks to everyone who came to Winter Solstice Soundscapes at Carlisle’s Vinyl Cafe just before Christmas, to enjoy performances from The Heartwood Institute and Howlround, as well as to officially launch new Howlround LP The Debatable Lands in the shop that inspired it all. With mulled wine and festive nibbles provided by ever-affable host James, a striking new set from fellow performer Jonathan (watch for a new Heartwood Institute LP in 2019!) and Howlround’s machines on surprisingly exemplary form, it was a fantastic evening and a brilliant way to round off our most amazing year yet. With all machines functioning somewhere in the sweet spot around perfect-imperfection, the result was, to my ears, one of Howlround’s strongest sets of recent months; a surprisingly heavy workout that apparently reminded a couple of punks in the crowd of Cabaret Voltaire – a compliment I shall take with pleasure! My Christmas bug has meant that I haven’t had a moment to listen back to the recording yet, but I’ll be sure to put something online in the near future. Must also thank Warwick Bazaar for having me on DJ duties the previous evening, in support of a superb set by AHRKH, a fellow Cumbrian and member of GNOD that I met several years ago in Salford while on tour with William Baskinski and Kepla. Weirdly the subject of our sharing a home town never came up back then – it’s a small world indeed. Anyway, do check out his very fine body of solo work here. It really does make me very happy to see places like Vinyl Cafe and Warwick Bazaar springing up and flourishing in my old home town. I’d have been in much less of a hurry to leave if they’d been around back when I was a permanent resident. Long may they reign!

Oh, and what of 2019? Loads to look forward to, not least Howlround’s next live shows at the end of the month. But more on those later, for the moment I’m still fighting off the last ravages of the flu, so I’m off for a cup of tea and a nice sit down. Wishing you all the best for a sonically invigorating 2019!