Hello. As you will no-doubt be aware Resonance FM is currently holding an on-air auction to raise some desperately needed funds to stay afloat. Right up until midnight on Sunday 19th February, there’s a veritable cavalcade of unique and wondrous items, special live events, celebrity guests, spontaneous competitions and much more. And for my own part, I shall be presenting the OST show in Jonny Trunk’s absence this Saturday 18th February from 16.30 – 18.30 on 104.4FM in London and worldwide on the web via www.resonancefm.com. I’ll be joined in my endeavours by Zoe from the Lucky Cat Show that goes out an hour previously, and together we have plans to turn the afternoon into a three-solid-hour bid-fest!

The auction is already taking place right NOW, with many splendid items up for grabs, but here’s a few we’ve organised specially for the OST show that I wanted to draw your attention to. Some of them are only being auctioned during the actual show itself, whereas others can be bid upon until right up to the following midnight. And the details of a couple of the items below haven’t been completely ironed out yet, so I’ll just keep updating when I have more to tell you. Let’s start with the BIG GUNS:

–‘The Shuttered Room’ OST, an unreleased LP by the late, great Basil Kirchin, 1 of only 29 pressed with special hand-made artwork. No reissues, no additional pressings, 29 copies for the world. You will never see this record again after Saturday, unless you win it! Here’s Station Manager Chris Weaver modelling the last copy you will ever see, and laughing nervously lest it should fall… 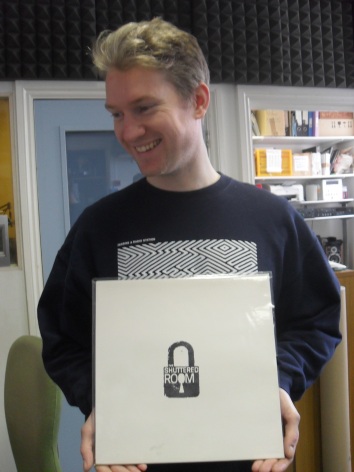 -A ridiculously rare DJ Food Postcard Record, 1 of only 30 pressed. Two minutes of strangeness in postcard-sized record form, released to coincide with his recent exhibition at the Pure Evil Gallery in London. This is the last one, there are no more.

– An extremely sexy DJ Food-designed 12″ Serrato controller disk on unique splatter vinyl. Used for controlling that fancy Serrato DJ software that allows you to DJ in a vinyl stylee using a laptop, and saving you the hassle of hauling a tonne of precious plastic around on night buses, or accidentally stepping on your prized copy of ‘Warhead’ in the dark. Think I might pop in a bid for this one myself…

-A 4xCD boxed set of commercially unavailable recordings by the great library music composer Roger Roger. Seriously, this is not available to the general public and is rare as hen’s teething gel. Bidding has started for this already, and no wonder, the music is truly subliminal. And there’s four CDs of it. Here’s Chris once again, taking time out from his tea-break to demonstrate:

–‘Play OST For Me’, your chance to be a sort-of host-cum-guest on your very own, personalised episode of The OST Show, playing all your favourite soundtracks and affiliated recordings, while Jonny Trunk plays butler and panders to your every whim. Bonus points if you play ‘A Whole New World’ or the theme from The X-Files’, as somebody did once (on a different show, I hasten to add).

–Five pairs of tickets to see one of the films at the BFI‘s forthcoming season concentrating on the work of  Vincente Minnelli and three pairs to any of the upcoming Opera Encore screenings (which are during the day, please take note!). With thanks to our friends at the British Film Institute for this most generous offer!

-A VERY exciting CD containing an exclusive unreleased work by sound artisit John Wynne, a four-minute piece concerning the secret to great radio, in a limited edition of 1, courtesy of our friends at ‘In The Dark‘! This work will not be made available anywhere else! Plus they’ve even thrown in a year’s free entry to their regular ‘nights of stories told through sound, of communal, focussed and curated listening events’, which is worth at least £30 in itself! Wow! Manager of In The Dark, Mr. Connor Walsh, will drop by with the treasured CD on Saturday to give it a plug and a play (but only a little, it’s secrets are strictly for the ears of the winner!

–A Sesame Street Oldskool Vol. 1 DVD Boxed set containing over seven hours of material, including the 1969 pilot episode, the opening episode of each of the first five seasons (check out the Orange Oscar!),the original ‘pitch’ film, songs such as ‘I Love Trash’ and ‘C is For Cookie’ and more bonus scenes than you can shake a stick at, including my all-time favourite – ‘The Great Cookie Thief’.

-A set of signed Kid Koala promotional postcards and sticker sheet, each one depicting an amusing koala-related image drawn by the kid himself, or a quirky peak into his jazz-playing-mosquito-loving world.

Furthermore, as some of you might already be aware, due to my recent harping on about it, I’ve just released a limited edition cassette album ‘Notes On Cow Life’ in collaboration with Mr. Guy J Jackson. There are only 50 copies available, with 50% of the proceeds from each sale are going to the People Live Here organisation, and until next Monday I’m donating the other 50% to Resonance. So if you feel like purchasing a fine piece of limited edition sound art now is the time to do it!

BUT for one lucky bidder, there’s also the  chance to own a mysterious, forbidden 51st copy. The copy that shouldn’t have been, an abomination, a blot on the laws of physics. 51 should simply not go into 50, it cannot. Nevertheless it exists. And it’s up for auction too:

Or if you love your radio but aren’t that interested in shiny objects to accompany it, then perhaps a donation is more up your street? Every little helps and the station accepts Paypal, cheque or cash stuffed into envelopes and thrown over the gates. A spreadsheet of all the items up for grabs and the current highest bids can be found by visiting here.

If you love Resonance  104.4 FM and the broadcasts by OST, please do support us via a donation, pledge, bequest, gift or purchase from our shop. The alternative – for the station to take regular on-air advertising, thus bringing us a step closer to Heart FM territory – is too hideous to even think about contemplating. Tune in on Saturday at 15.30 (for one hour of Lucky Cat, then two of OST) with your chequebook, paypal account or cash-stuffed envelope close to hand and help us once again celebrate this unique and extraordinary station!