I’m sure at least some of you will be familiar with that endlessly-repeated cornerstone of BBC1’s daytime schedule that is Homes Under The Hammer. Alongside Bargain Hunt and Crap in the Attic, it’s the kind of fluffy, breezy televisual feast that Mumsie watches while drinking her coffee after taking the ironing for a walk. Though perhaps not such essential viewing for those of us who confidently expect to end their days in the magnolia wallpaper and chipboard wardrobe surroundings of rented accommodation.

This interpretation was inspired by watching an extract in the Broadcasting House canteen with the sound turned down while queuing for my third coffee of the day during heavy rain (I do wish all my ideas would arrive in this manner – I’d make a fortune). Some might argue that as the BBC’s recently-crowned ‘Resident Hauntologist’ (not my idea, but I’ve decided to stick with it) the outcome is a touch predictable; but it’s surprising how easy it is to take daytime-light-factual into Twin-Peaks territory with little more than a few screen-grabs and a sense of adventure…

Moving on, I can now officially confirm that a second pressing of The Ghosts Of Bush is in the works and should hopefully be with us sometime next week. To celebrate, check out this Press Release I knocked together using an old World Service Tape Report sheet stolen from a colleague’s locker:

I’ve ordered 200 green and white vinyl which will be heading towards my friends over at Manchester-based experimental music emporium Boomkat as soon as possible (and for the large number of you who have been emailing robinthefog at gmail dot com with the heading ‘re-press please’ I shall be sending you an advanced warning as soon as the stock leaves my hands). There are several reasons for handing complete control of the stock over to Boomkat rather than selling it personally through the label website: The first is that last week they sold 100 copies in roughly four hours. The second is that I’m facing a ban from my local Post Office after turning up five lunchtimes in a row with a trolley load of parcels taller than I was/am;  thirdly because they asked nicely, and fourthly because they wrote this about it in their mailing shot: 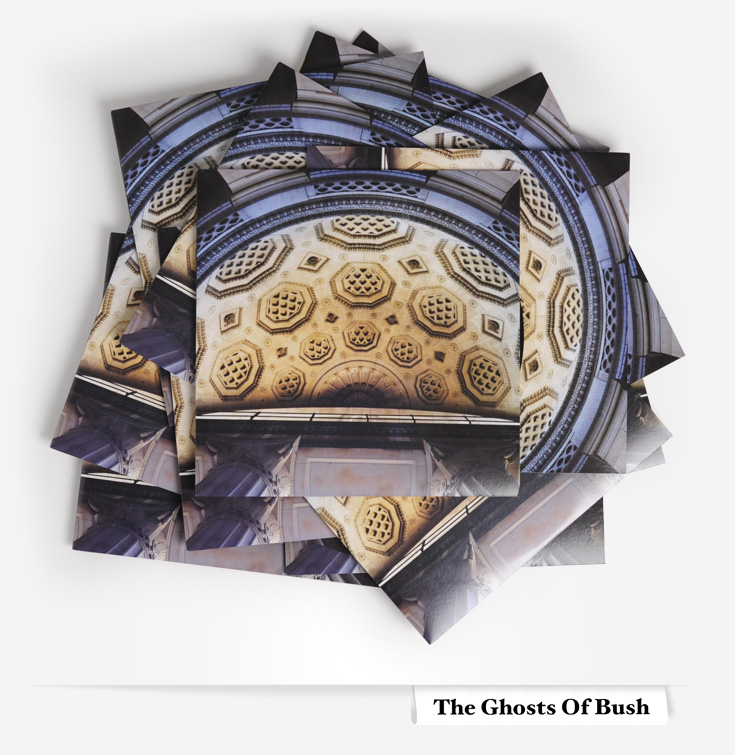 Having already created a huge amount of interest, ‘The Ghosts Of Bush’ is finally here on a limited vinyl pressing and is easily one of the most pertinent and interesting Radiophonic and hauntological artefacts we’ve had the pleasure of stocking in recent years. Created by World Service studio manager Robin The Fog, the album consists entirely of nocturnal location recordings made by him at Bush House, the iconic home of the BBC’s world service for over seven decades before it moved to a new location in July this year.

The recordings were eventually manipulated on dual quarter-inch reel-to-reel machines, creating a seamlessly segued side of ghostly, decaying acoustic sounds captured within the stone-clad building’s numerous corridors, lifts, studios and stairwells. As you’d imagine, the effect is immensely evocative, at once recalling Daphne Oram‘s most isolated experiments, Konstantin Raudive‘s famous EVP recordings, the disintegrating loops of William Basinski, even Burial’s most haunting interludes, and not least AFX’s ‘SAW II’ classic; a phosphorescing mass of ferric-stroked midnight sonorities and metaphysical murmurs, or as the artist himself puts it “The sounds the building makes when it thinks no one is listening”.

Daphne Oram, Burial, Basinski, AFX – All heroes of mine. At this rate I’m going to need a much, much bigger hat! But boasting aside, I imagine those 200 may well be snapped up pretty quickly, so those of you who missed out on the first pressing are advised to keep your ear to the wind. While you’re waiting, why not enjoy a bespoke promotional mixtape I put together for Mr. Joseph Stannard’s blog The Outer Church? I call it the ‘Foggy Nightshift Mix’ and it can be found here.

Finally, I was astonished today to discover a copy of the album on Ebay retailing at £50, alongside three more on popular record-selling website Discogs going for not that much cheaper. Not only that, there appears to be an almighty ding-dong of an argument occurring in the comments thread as to the moral implications of selling them at such an inflated price, as well as wondering as to what effect all of this is having on my ‘girlfriend’ (whoever she is). I’d like to make it absolutely clear that none of these people is me in disguise. I simply sell records at normal price on a first-come, first-served basis. I would suggest that if you really can’t find a copy through the usual channels you just be patient and we’ll get to you eventually. And at a reasonable price too. Have a download while you’re waiting.

Perhaps if I was a little more business-savvy I would re-think my strategy and keep a secret consignment to sustain me in my dotage. Then again, perhaps not. I’m already planning a follow-up LP on an even-more obscure subject. But that’s another story…