Do you know what a ‘Butt-fast Joy-Girl’ is? Or a ‘Hanky Panky Humper’? No? Well, pull up a sturdy pew and loosen some buttons.

You might remember a piece I made last year entitled ‘A Corner seat in a smoker facing the engine’ for the Radio 4 series Short Cuts. Presented by In The Dark founder Nina Garthwaite and produced by Eleanor McDowall for Falling Tree Productions, Short Cuts was a selection of brief encounters, true stories and found sound, ‘a showcase of delightful and adventurous short documentaries’. The response to ‘ACSIASFTE’, which went out as part of the first episode was fantastic, particularly the report I received from one anonymous listener who claimed to have ‘laughed until [he] wept and nearly crashed [his] car’. In fact, thanks to an excellent job by Nina and Eleanor the response to Short Cuts was so overwhelmingly positive that a second series was quickly planned and the call for fresh submissions sent out. Unfortunately by this point I was rather busy putting the finishing touches to ‘The Ghosts Of Bush’ and didn’t have much time to spare conjuring up new work. Luckily, inspiration soon popped up:

Yes, I’m afraid we’re back here again. Some of my more adventurous followers might remember the Mucky Mixxxtape I produced a couple of years ago, a dirty little voyage into some of the smuttier echelons of my record collection, featuring Blowers and Freaks aplenty. It  remains far-and-away my most popular mixtape and one of the things for which I am best known, which just goes to show it’s unwise to question your public. Or indeed approach them.

Anyway, one of the mooted episode titles for this new Short Cuts series was simply the word ‘cut’, and  my own genius idea was to apply this theme to my copy of the thoroughly odious 1971 American pornographic recording ‘Midnight Cowpoke’, a cheap and tawdry affair telling the story of a country bumpkin named Clyde visiting New York for the first time and somehow arriving at the front door of two women or ill-repute. A cloistered fellow, he has no idea of the ways of the flesh (indeed he assumes at first that they’re conversing about chickens and donkeys) and it’s left to our ‘butt-fast joy-girl’ duo Marge and Vicky to teach him a few decidedly unpleasant lessons. In short it’s three bad actors pretending to have sex over the course of  forty-two grubby, tiresome minutes, entirely fake and pretty much unlistenable. My plan was to approach the recording scientifically  like some kind of audio surgeon with too much time on his hands and seamlessly hack and snip away every last vestige of badly-acted eroticism, every last one of the record’s copious profanities, and every single moment of ‘there’s-no-way-you-could-actually-be-doing-that-while-providing-such-a-lucid-running-commentary’ incredulity in order to glimpse at the bare bones beneath. What, if anything, would be left?  And so I took up my tools and got down to business (if you’ll pardon the…, er,  well…)

Perhaps predictably, the results were pretty insubstantial. The original LP, as mentioned above, weighed in at forty-two minutes. After my comprehensive de-filthing campaign, the newly re-titled ‘All Cow, No Poke’ lasted less than two:

Synopsis: Clyde has come to The New York. He recently went to a big dance. His dad owned a farm but died from cancer.  He sold the farm but kept the lumber rights on the remaining five hundred acres. He’d like to purchase some furniture. 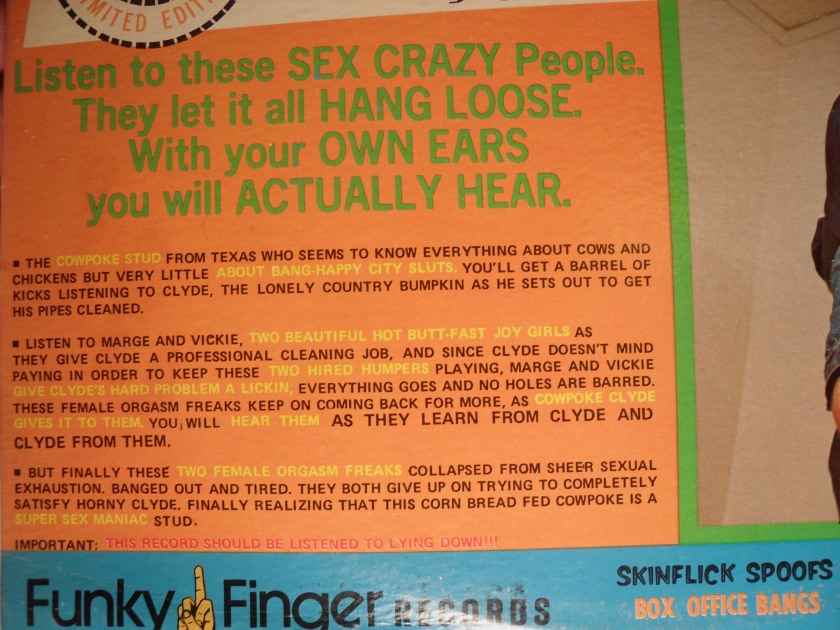 Why did I do it? What did I hope to achieve? Well, perhaps it was because this record constitutes another entry to my aforementioned list of things that I couldn’t quite believe existed. And also because I can’t help but find the sheer banality of these left-overs fascinatingly surreal. At what point  when making a pornographic recording does the producer decide that there needs to be some sort of sub-plot involving lumber-rights and the purchase of furniture and what does he hope this will add to the proceedings? Is it all in aid of giving bad actors a credible narrative to work with? The addition of dramatic realism?  And if so, what’s so exciting about lumber? They even manage to miss out the obvious joke about ‘having wood’ which surely would have been covered before lunchtime on day one at porn school. Why bother including such drab, everyday pointlessness in a recording which is otherwise a piece of ridiculous escapism? Are purchasers of this record going to feel let-down if there’s not a good story to accompany all the dinging and donging? Would the intended demographic pay the slightest attention to such details even if everything else was removed?

In hindsight, I should have realised that these weren’t quite the kind of questions that the kettle-boiling listeners of Radio 4 were particularly desperate to find answers for, and although I’m told it raised a giggle round the Falling Tree offices, they tactfully suggested it was perhaps just a little bit racey for a daytime nationwide radio programme. A bit rich if a rumour I heard regarding a recent episode of The Archers turns out to be true, but let it pass…

Anyway, the good news is that Short Cuts carried on without me and was of course every bit as brilliant as the first series. In The Dark have got some great listening events planned for 2013 and ‘All Cow, No Poke’ finally got it’s inaugural hearing last week on the Dexter Bently Hello Goodbye Show as part of Resonance FM‘s fundraising bonanzer. They proved to be far less worried about the impact it might have on the sensibilities of their lunchtime audience, but then Hello Goodbye has delighted in blasting it’s listeners with all kind of noisy filth for over a decade now. And while we’re on the subject,  thanks to everyone who tuned into the four-hour marathon OST show presented by myself and Hannh Brown of Modern Day Magpie. We were really chuffed with the results and I’m delighted to announce that the test pressing of ‘Ghosts Of Bush’ fetched a whopping £77! All proceeds, as mentioned before, go to keeping the greatest radio station in the world on air and advert free for another year. Well done to you all!

PS If this is your first visit to this site, please let me assure you that all this smut is very much the exception and that I’m hardly ever forced to censor my material using stuffed animals. Honestly, hardly ever…