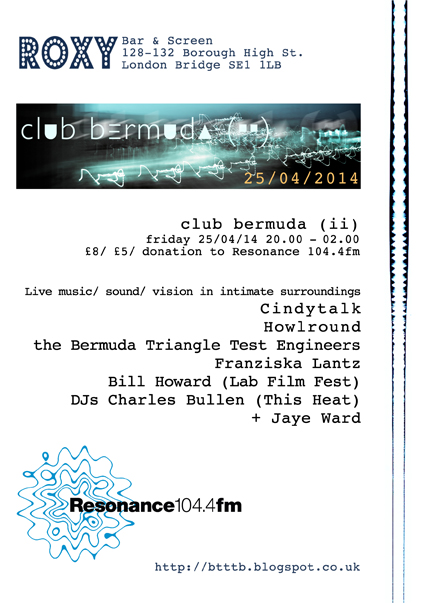 Very excited about this weekend, when Howlround will be spooling up for a live performance at the Roxy Bar and Screen as part of Club Bermuda ii. And a fantastic line-up too, including Cindytalk, Charles Bullen of This Heat and Franziska Lantz, who you might remember from our collaboration for Radio 3’s Late Junction a few months back. There’s also a Facebook Events Page for those of a social media disposition. All proceeds go to help keep Resonance FM on air and if the previous event is anything to go by, it promises to be a memorable evening for everyone concerned. Hope to see you there.

If that wasn’t enough, we’ll be guests of Alien Jams on NTS Radio at 5pm this Sunday, where we’ll be unveiling some brand new Howlround works exclusively on the show. These are fresh off the spools, less than a week old and will hopefully feature in some shape or form on a new release in the summer. It’s a bit of a departure from our currently released material, but I certainly hope you’ll find them sonically intriguing and am looking forward to giving them an airing!

Speaking of exclusive tracks, Howlround have contributed a previously unreleased short work ‘Wing to Wing’ to a CD sampler put together by Running On Air Music, one of the brains behind last weekend’s brilliant Archaeology event in Winchester. We had a fabulous time enjoying performances by Kemper Norton, Olan Mill, Stephen C. Stamper and Clive Henry and put on one of our finest turns yet, though I say so myself.  Each of the aforementioned has also donated an exclusive work, thus making it pretty essential listening, quite frankly. Certainly the only way you’ll get to hear ‘Wing to Wing’ until our huge career retrospective is released fifty years from now. Available here as a very limited CD and download if you can’t wait until then.

As you can see, this 100th post is a rather busy and hurried affair, with lots to impart, which just goes to demonstrate what a busy couple of weeks it’s been. Remember that my BBC World Service feature on The Radiophonic Workshop Revivial and interview with Paddy Kingsland are both still available on this site for your viewing pleasure, with Dick Mills, Roger Limb and Mark Ayres to follow. But that’s probably enough to be getting on with for now. Hope to be seeing some of you over the weekend and I’ll leave you with this live mix I made for my good friends at NO-FM last year during my residency in Serbia, which has finally found it’s way onto Mixcloud. You should definitely check these guys out…