Hello you. Crumbs, it feels like my feet have barely touched the ground this last week. The above recording was extracted from a marathon ninety-minute tape loop session broadcast live from the Radio Revolten studio in Rathausstraße as part of their month-long series of experimental broadcasts, performances, installations, workshops and much more taking place throughout October in the city of Halle, Germany. It was tremendous fun and I have it on good authority that people were tuning in from as far afield as Catalonia, Ohio and Wales to savour the delightful chaos of threading up four machines with slightly wonky tape loops and trying to keep them in order. Sadly, it being a radio broadcast, they didn’t get to also enjoy the equally beautiful mess we made of the studio:

The previous evening we had performed in the adjoining Club Revolten concert space to a packed house alongside legendary percussionist Chris Cutler and electronics whizz Víctor Mazón Gardoqui. As well as broadcasting it live, the good folk of Radio Revolten have podcasted our set in full for your enjoyment and you can also read an intriguing review by the artist Gabi Schaffner (who also took these photos) here.

“Loops are such strange things…or (better maybe) concepts? In one way they are limited, and in another way they are endless. In one way they connect to the myth of the Eternal Return, and in another way – like in modification or decay – they present an ongoing series of variations that mimic almost physiological processes […] Some of them recalled recordings made underwater, some howled like FM tones, some just hovered under your active awareness like a foggy notion. Close to the end of the concert a series of „standing waves“ piled up, slowly, one after another, and collapsed in slow motion … a showdown of acoustic phantoms reeling in epical dissolution.”

Thanks to everyone who came down or tuned in and thanks to Knut, Sarah and the Revolten team for not only having us but for giving us our own office in which to conduct a marathon two-day cutting and splicing workshop in preparation!

Despite all this relentless activity, which also included my marathon, non-stop, five-hour DJ set for local cinema Kino-Zazie, there was still time to enjoy excellent performances from Mary Stark and Willem De Ridder plus film screenings and a bespoke programme from the Full Of Noises archive curated by Glenn Boulter. There was even time for a field trip to inspect the transmitter, perched on a tower high above the town, which required a slightly terrifying trip up a spiral staircase hanging precariously off the parapet. Worth it just for the view over Saxony-Anhalt!

Anyway, Radio Revolten continues broadcasting on FM, AM and online until the end of the month, so do tune in. I’m particularly looking forward to catching ‘Dead Air Spaces’, a new bespoke work by Radiophrenia’s Mark Vernon on the evening of the 25th at 8pm (7pm UK time). Mark also very kindly gave me a copy of his latest LP Lend An Ear, Leave A Word, a project that mixes field recordings of contemporary Lisbon with vintage recordings from tapes, micro-casettes and dictaphones found in one of the city’s flea markets. It’s great!

The sleevenotes list the source material as including drunken conversations about stolen car parts, baby recordings, crying in a public toilet, pouring sparkling wine, wowing, fluttering, crosstalk, feedback, pause button clunks etc., and in Mark’s hands these recordings soon mulch and ferment together, particularly on the second side where the sounds leave their moorings completely and set course for uncharted territory. It’s perhaps his finest work to date. More information on both his performance and this album can be found at his own Meagre Resource website here. Take my advice and order yourself a copy of the vinyl quick! 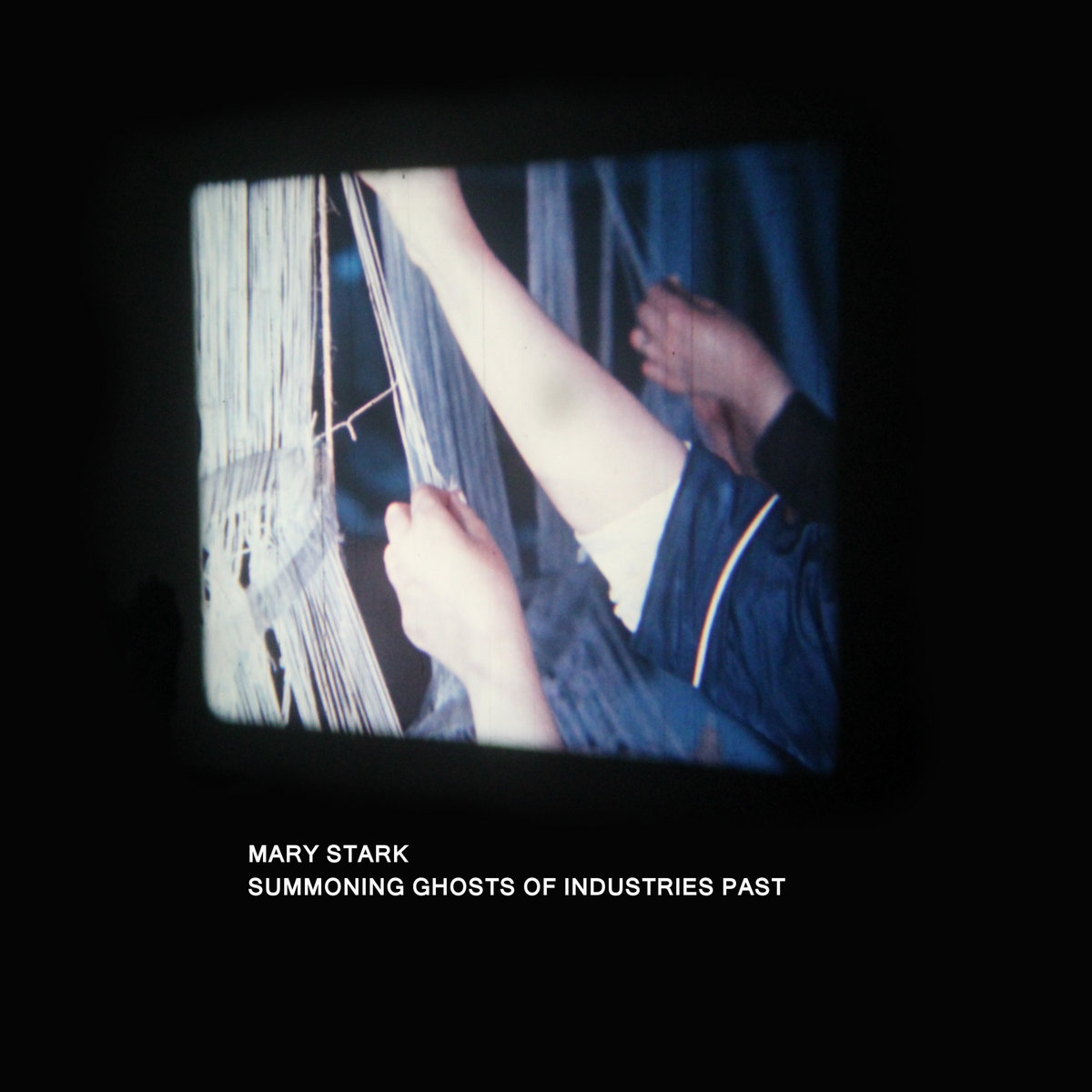 In fact, while we’re discussing recordings made by fellow performers, I must also plug Mary Stark‘s Summoning Ghosts Of Industries Past, a limited edition cassette on Graham Dunning’s Fractal Meat label that covers subject matter very similar to her performance at Club Revolten, projecting hand-cut loops of 16mm film and mixing the optical sound with field recordings and amplified sowing machine to create beautiful eulogy to bygone industries and obsolete technology. It’s thrilling to watch her put it together live, of course, but the recordings are equally worthy of your attention. Only a tiny handful of copies left – be quick!

Speaking of recordings for sale, I did manage to find half an hour to sneak out for a quick browse in a local record emporium before the second Howlround broadcast, from which I returned with an armful of intriguing East German synth, scholastic and soundtrack bits and bobs that I shall endeavour to share with you anon. In the meantime, this brings us rather neatly back to the UK and to this week’s edition of Near Mint, which pays a return visit to the record bag of legendary collector, mash-up merchant and analogue synth-tinkerer Ben Soundhog:

It’s another beautifully varied selection, this week featuring some Bollywood from R.D Burman and Ashe Bohsle, some Keith Mansfield on KPM, Johnny Harris’ magnificent ‘Footprints On The Moon’ and another banking jingle that unblushingly demands of its listener ‘why not get rich?’ – a rhetorical question that puts me in mind of The Simpsons’ “I won the lottery. Why don’t you win the lottery too?!” sketch. Putting such financial concerns to one side, we then move on to perhaps the single most remarkable record yet to be featured on Near Mint, a simple spoken tale of everyday heartbreak recited in a soft midlands burr by this chap:

Ah, yes, ‘Benny’s Theme’, in which the titular hero delivers a rambling spoken-word monologue about lost love and broken dreams, sounding not unlike that one drunk guy you exit the nightbus five stops early to get away from – only this time with ponderous strings and a soggy disco beat to back him up. For those either reading this from faraway lands, classed as ‘millennials’ or otherwise spared the travails of growing up in Britain in the 70s and 80s, I should clarify that Benny was a ‘loveable simpleton’ employed as some sort of handyman at the Crossroads Motel, the location of a famously awful soap opera which ran on British Television for far, far too long and, despite its wooden acting and wobbly sets remains fondly remembered by women of a certain age everywhere. So popular was it, in fact, that not only did my own dear old Grandma Fog refer to it as ‘me programme’ whenever it came on (and woe betide anyone who interrupted it to ask for a biscuit), but also in 1977, against all conventional logic, enough people bought this record for it to actually reach the giddy heights of number 39 in the British Hit Parade. It does make me wonder if my Gran might have been one of them.

I was going to close at this point by observing once again that living in the 70s must have been completely frightful, but then a moment later I stumbled across a follow-up Benny released in 1980 which somehow pulls off the miracle of being far, far worse. Seriously, if you can make it through the mawkish atrocity that is ‘Waiting At The Crossroads’ without choking up a lung I’ll eat that man’s wooly hat. And then a few more moments later, with the room actually beginning to spin a little, I discovered that the gargantuan British wrestler Giant Haystacks was also releasing novelty pop singles around the same time as well. What the hell was going on in Britain during the turn of the 80s?

But there is one comforting thought that you must take from all of this, dear readers: We are approaching the end of a truly rotten year for so many, where the forces of darkness appear to be taking over and the rest of us face increasingly uncertain times ahead. But the once indisputable truth to cling to in these dark days is the fact that, for the foreseeable future, our hit parades are entirely likely to remain free of Bennys, Haystacks and other lumbering oafs who shouldn’t be there. While the human race could truly be said to be at a Crossroads, we can at least console ourselves  with the fact that it’s not going to be that Crossroads…