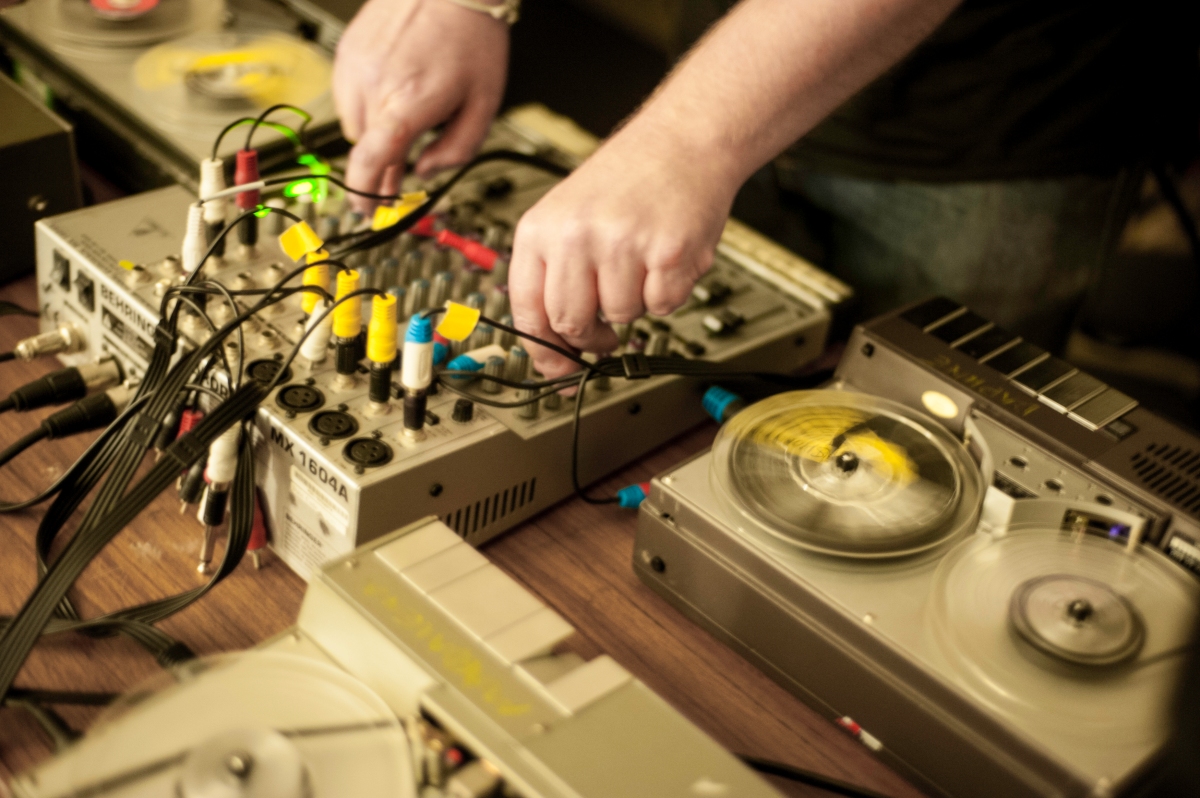 Hello you. It’s high time for an update on these pages following a breathless couple of weeks chasing tape loops around the countryside. I had very much intended to blog about all this excitement in real time, but that proved surprisingly difficult when in the middle of a field in deepest Oxfordshire or indeed some forty metres below another field in equally-deepest Essex. Add to that the three cups of Wetherspoons coffee I’ve just imbibed in order to justify using their appallingly faltering wifi and it’s a wonder I’m managing to type anything at all!

Anyway, to kick off this mini retrospective, here’s an extract from Howlround’s performance at Supernormal from Friday night, where we rocked the Vortex Stage as the proud filling in a Teleplasmiste and Unica Zurn sandwich. Thanks to Mark Pilkington, sound engineer Jimmy, plus Steve and Janine from Psyche Tropes (and not just for the supplying birthday-related espresso martinis the following morning!). Special thanks must to also go to Nic Finch for these splendid illustrations of Howlround in action, which I discovered the following day pinned to various surfaces all around the festival site. Check out more of Nic’s work here. There was a very complimentary review of the festival in CCQ Magazine (appearing on their site a great deal quicker than this one), which described Howlround as ‘easily the highlight of Friday’, an incredible accolade when you consider the evening was headlined by Wolf Eyes! 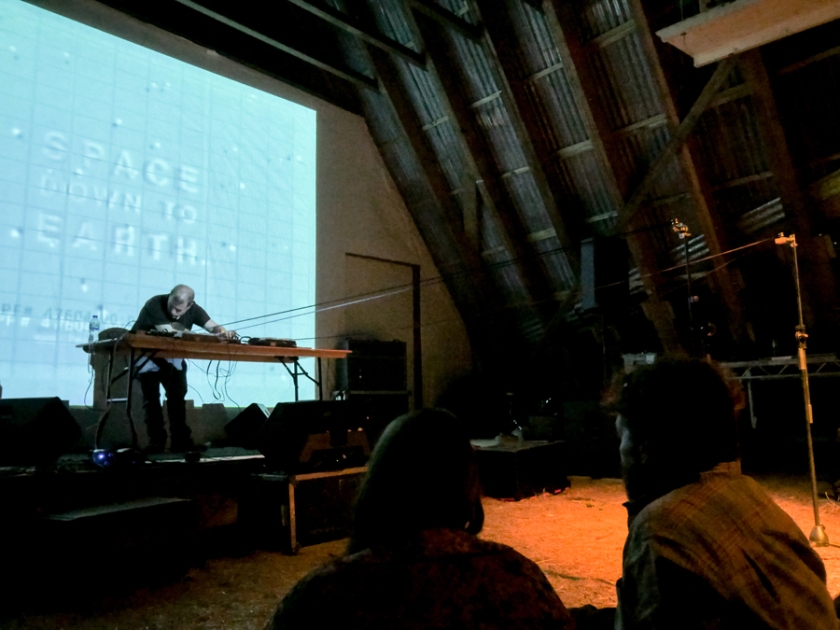 The sounds are deep, part natural, part industrial, making me think of a neverending uninterrupted series of tube and train journeys, taken alone; eerie and disconcerting, flashed through with the clacking of the tape reels. CCQ Mag

The previous Friday night had also been a hive of activity as the long-awaited Delaware Road event at Kelvdeon Hatch ‘Secret’ Nuclear Bunker finally came to pass. An audio-visual, multi-sensory experience months in preparation, meticulously planned and taking over the entire complex of operations rooms, dormitories, offices and sick bays with a psychedelic extravaganza of sound and image buried deep within a remote Essex hillside. Featuring performances by Howlround, Teleplasmiste (them again!), Loose Capacitor, Twelve Hour Foundation, Simon James, DJ Food, Radionics Radio and many more. The results were nothing short of a triumph, with the bunker completely sold out and packed to the rafters with revellers excitedly exploring the surroundings. People talk a lot about events being ‘immersive’ these days, but with strange sounds and images penetrating ever corner of this most shadowy relic of all-too-recent history, and with the Churchill-like figure of Dolly Dolly at the helm to tie all the strands together; I’m convinced that a new standard has been set!

Howlround’s own performance consisted of a three hour installation in the Telex Room next to the radio studio, with a film programme by Psyche Tropes taking place next door – perhaps the one place in the entire complex where I could envision feeling slightly at home in the event of armageddon. As you can see from the pictures, the installation, including assistance provided by two wordless (and armless) volunteers in black cowls made for a suitably eye-catching affair, captured here in the photographs of Pete Woodhead (colour) and Victoria Hastings (b/w). A big thank you to them both, and there’s plenty more of their photos (and those of others) to be admired by visiting The Delaware Road’s Facebook page.

One downside to having to remain in the Telex room and keep a close eye and a firm hand on my semi-trusty machines and two wordless assistants for the duration of the event, was being sadly unable to take in any of the other performances, all of which were designed to occur simultaneously and to last for the duration of the event; providing the audience with a veritable smorgasbord of the uncanny at every turn. However, the information gained second-hand through reports and feedback from revellers constantly passing and re-passing through for their hit of tape loop action assures me that there were no shortage of memorable moments. One person who was afforded a more rounded perspective of the event was DJ Food, who used the time between his sets to take in some of the performances going on around the site and engage in a spot of mingling. The resulting review on his own blog is – as ever – worth a read.

In short, one of the most memorable nights of 2017 and certainly one of the most remarkable venues Howlround have played thus far, an increasingly crowded field when you take all of our cemeteries, water tanks, reservoirs and Victorian engineering shafts into account. A tribute to the ever-growing Delaware Road story, the community of artists, musicians, DJs, nerds and weirdos that have grown around it, and the tireless imagination of the brains behind it all, Buried Treasure Records boss Mr. Alan Gubby. Can’t wait to see where he’s taking us next, though I expect he’ll probably want a cup of tea and a sit down first. In the meantime, make sure you pick up a copy of the self-titled debut LP by his group Revbjelde, another personal highlight of 2017.

Finally, a quick mention of another 2017 highlight, Howlround’s recent headlining of the Psyche Tropes event at St John on Bethnal Green as part of the East End Film Festival, where we performed a live score of A Creak In Time, our film produced in collaboration with director Steve McInerney (and still available on heavyweight vinyl with streaming and download here). That performance and the event in question, featuring performances Sally Golding, Spatial, Ian Helliwell and Steve’s own Merkaba Macabre project, are the subject of a very flattering review in the latest edition of the The Wire, available now from all good outlets. Thanks to Katrina Dixon and again to all at St John for having us – hope we didn’t do too much damage to the candlesticks by using them as loop restraints?* They only fell over a few times, after all. Rumour has it we’ll be returning to the church in some shape or form come the autumn. But more on that later… 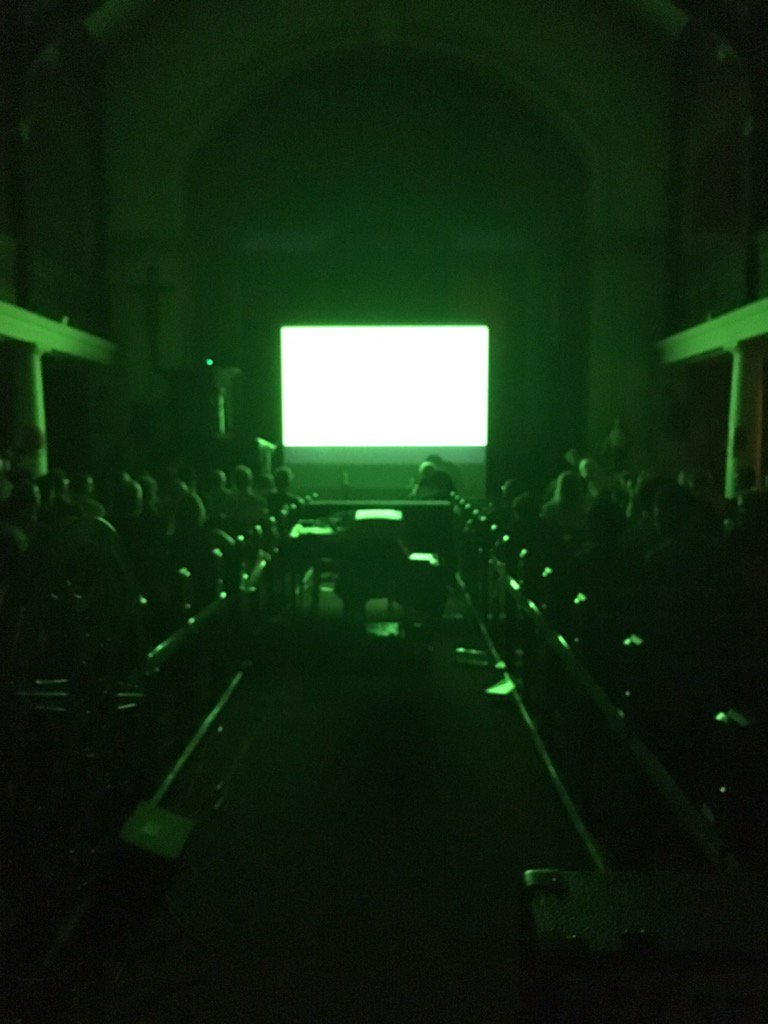 As the sound shreds and fades, it leaves behind a cosmic wow to take out into the night – is this the sound and feel of being sucked into a black hole? Katrina Dixon, The Wire. 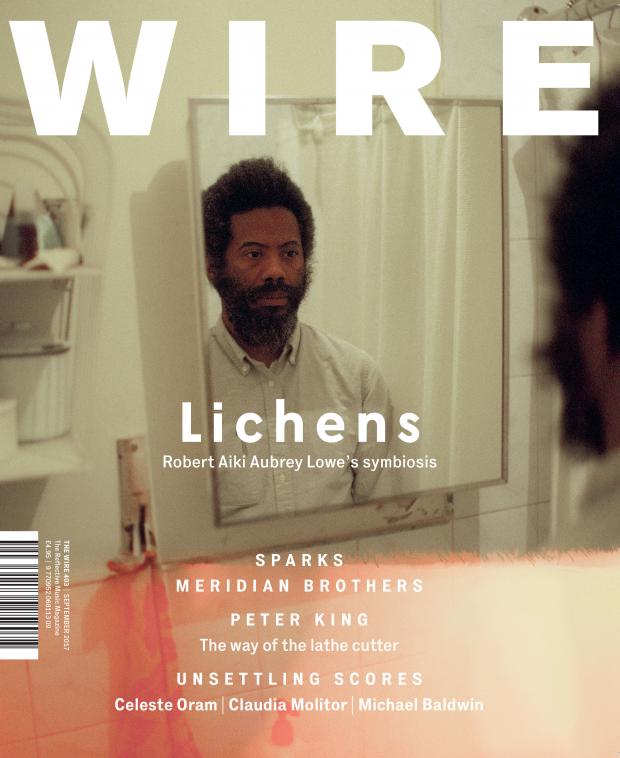 *To clarify, we did get permission to use the candlesticks first. I would hate anyone to think we would take any liturgical liberties!

One thought on “Super-Bunker: Howlround Heads For The Countryside”