Hello You. Please enjoy the breathless update from Fog Towers as I gear up for another busy week. First off, if you happen to be in the vicinity of The Barbican on Tuesday night, why not join myself, Tanya Nwachukwu, Bump Kin and host Nick Luscombe for the first in a series of talks about the recently launched Muscity x Culture Mile project? 6pm at the Life Rewired hub (with Tanya and Bump Kin at 7pm) and it’s all FREE! Should be a fun and stimulating evening, plus a useful primer for anyone who has ever asked me ‘Er, what exactly was all that about?’ – and such people are LEGION, trust me! Further details can be found here.

Very excited to be playing at A Midsummer Night’s Happening this Friday, a one day spectacular put together by Ghost Box and Trunk Records in association with The state51 Conspiracy. Jonny and I will be presenting The Kirchin Tape Lab, in which impossibly rare, unique and previously unheard recordings from the tape archive of the legendary composer Basil Kirchin will be played and mixed on the Howlround live quartet for the first time ever, along with the accompanying piano improvisations of Steve Beresford. Also performing on the night will be Pye Corner Audio, The Soundcarriers, Justin Hopper and Sharon Kraus and much more besides. Of course I would normally point you in the direction of tickets and further information, but sadly the whole event sold out almost immediately, even before I could share the news on any channels (almost before it was confirmed I was playing, if you can believe that). Heartfelt apologies, fellow tape heads. Hopefully they’ll be more of this stuff in the future…

Being given access to such an extraordinary body of unreleased recordings from this most maverick of composers has been an honour and a privilege, although I can tell you that getting it back to Penge all the way from the Trunk compound was a rather nerve-wracking experience – I kept expecting my tote bag of sonic treasures to be snatched at any moment by avant garde muggers. Thankfully tapes and bearer alike arrived at Fog Towers in one piece, and while I naturally can’t divulge any of the audio contents on these pages or anywhere else, I’m sure Jonny won’t mind my sharing a few tantalising glimpses of Basil’s handwritten sleevenotes.

And what of those aforementioned undivulged contents? Well, it’s a mixture of fleshed out compositions, tape experiments, field recordings, electronic doodles, plus – as you’ll notice – PIGS. And as far as I’m concerned they can and should serve as a much-needed call-out to all those of us working in similar fields to pull our socks up and just DO IT BETTER! And just think – these are merely a few tapes out of hundreds in the Kirchin collection! Hopefully they’ll all see the light of day at some point, but in the meantime, just remember: Basil Kirchin is your friend.

…And I made another new friend too!

Continuing with tape, but on a slightly more accessible front, the excitement continues on Sunday 23rd when I’ll be contributing to the latest event from Palace Electrics as part of the 2019 Crystal Palace Festival. Three local artists have been asked to reinterpret a famous song that has the word ‘radio’ as its theme. No doubt you can readily guess what inspired the title:

I’ve been tasked with dismantling a 1985 rap classic from Mr. LL Cool J, though given the way the sessions are currently progressing, it’s less reinterpretation and more evisceration. I’m starting to wonder just how much control I actually have over my tape loop arsenal and whether in reality I’m just hanging on for dear life. Anyway, entry is FREE, it’s a killer line up and last time I played Palace Electrics it was absolutely banging, so you really can’t go wrong – and if you subscribe to that whole ‘mistake as hidden intention’ philosophy, neither can I! Seriously, Kirchin to Cool J in 72 hours – who else could boast such an unwieldily career arc?

Rather belatedly, I must point you in the direction of an exclusive new Howlround track that appears on Warwick Bazaar 2018, a rather splendid download sampler from the titular Carlisle shop-cum-live venue that just happens to be my favourite Cumbrian-based shop-cum-live-venue-that-isn’t-Vinyl-Cafe – and that’s no mean accolade! It’s a compilation of some of the artists that played there last year and proves to be an impressively varied role call, featuring a string of excellent band names such as Death Bed, Cosmic Cat and the like, plus my old mucker Heartwood Institute aka Jonathan Sharp. Incidentally, Jonathan’s solo LP under his own name will shortly be dropping on Castles In Space and is already getting some very approving nods from those in the know – hopefully my own copy will be arriving any day now so I can join in with them! 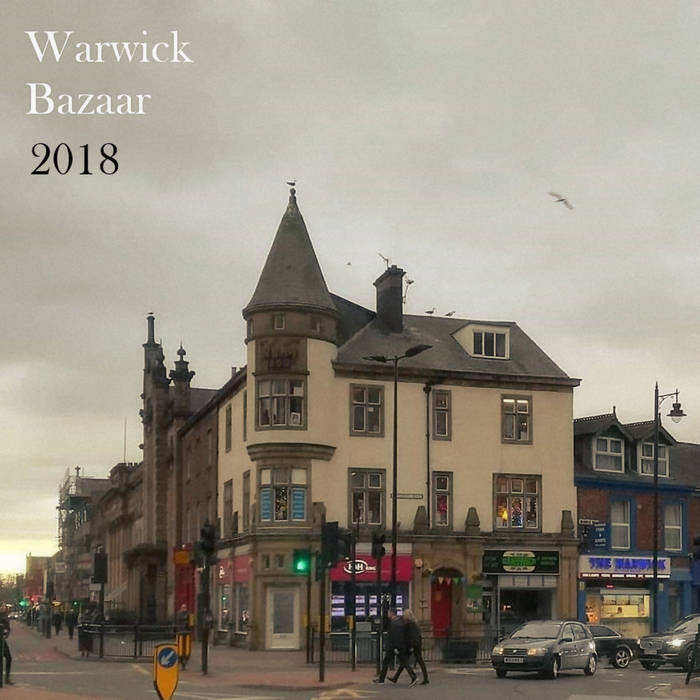 In the meantime Warwick Bazaar 2018 is available now as a name-your-price download and I know a lot of care an attention has gone into this sampler, so do be sure to bung them a few quid. May I whet your appetite by hereby presenting the previously unreleased track ‘Middle Gelt’. A dear friend once described this track as ‘like angels wailing’, which I’m taking as a compliment despite the fact that she claimed playing it at four in the morning was freaking her out a bit:

Finally, do please head on over to the London’s Sound Heritage blog if you have a spare moment, where our latest post features a cache of vintage recordings from London’s Pirate past (pirate radio, that is, not the shivery timbers kind) courtesy of one DJ Wrongspeed. There’s also this exciting discovery we made as part of our regular #TapeBoxTuesday feature, which I’m still giggling about even now. Nice work, Caroline!

Two exciting landmarks for #TapeboxTuesday this week: 1.) The discovery of the first D46 cassette our audio preservation engineer has ever seen in the wild and 2.) the fact that it contains what may be THE SHORTEST ORAL HISTORY EVER RECORDED!#SaveOurSounds @BLSoundHeritage pic.twitter.com/FsxotEdmC6