Hello you. First item on a fairly bumper agenda this week, I am absolutely thrilled and delighted to unveil the latest release in Howlround‘s growing catalogue:

The Blow Vol. 2, a split cassette with my old mucker Time Attendant will be released in November on Manchester’s Front And Follow label on a limited edition cassette plus download, but if you simply cannot wait until then it’s available for pre-order already. The second in a planned series of collaborative releases on the label and taking over from the excellent Volume 1 featuring Hoofus and IX Tab (now sold out physically), all of the music on my half was created by manipulating a single field recording taken in the Mojave desert ‘almost ghost town’ of Amboy, California:

The album was produced over the course of spring and summer this year, though the source material was originally recorded a couple of summers ago while on a pilgrimage to visit one of the great desert ‘readymades’, namely the dilapidated sign of Roy’s Motel which is the town’s most famous landmark. Straddling Route 66 some forty-three miles from Joshua Tree as the crow flies (and sixty-four by road), this is a remote location indeed. Did you even notice the enormous freight train making it’s way across the bottom right of the above picture? Must have been almost a mile long, but even that gets lost amongst such a vast and arid desert landscape. The population of this once-bustling town is now a mere ‘handful’ (which sounds slightly more optimistic than the 2000 census which put it at ‘4’), although bizarrely it does still maintain a working post office.

What’s even stranger is how wet and squidgy the resulting recordings have ended up sounding, something I can only attribute once again to the transformative properties of tape. The source material was created entirely by working the rusted and squeaking hinges of a cupboard door hidden inside the vintage writing desk pictured above, while my friend Kaitlyn patiently sat in the car enjoying the delights of air conditioning and Garth Brooks. At some point I’m hoping to return to Amboy and leave these newly transformed recordings back where they came from, perhaps also  taking time out to enjoy another bottle of ‘Root 66 Beer’ and maybe, if I’m really lucky, meeting Chandra Brenner, the lovely yet somewhat vacant host of this completely batsh*t bananas documentary about the town. But all that might be a while off yet. In the meantime, do get your order in early, there are only 100 copies and if the first volume is anything to go by they’ll fly out pretty sharpish!

Meanwhile, there’s just a few days to go before Howlround’s SOLD-OUT performance at Brompton Cemetery Chapel as part of London Month Of The Dead and in anticipation of this historic event, I’ve been jumping onto the PR bandwagon. Firstly, I was interviewed for 6Music news by the splendid Elizabeth Alker, with the results played out on the Sean Keaveney Breakfast Show and again later on Radcliffe and Maconie. The first of these airings has been captured by a quick-thinking well-wisher and uploaded to Soundcloud if you fancy a listen. I haven’t actually done so myself  yet, but I’m encouraged to hear that apparently there was a lot of giggling involved…

Howlround – London Month of the Dead from Hook Research on Vimeo.

Even more excitingly, the nice people at Hook Research have made this short video of me in the studio briefly attempting to explain the Howlround philosophy and modus operandi before heading down to the cemetery on a sound-gathering expedition. Thanks must go to Sam Harris and Nick Fisher for doing such a great job and making me look and sound halfway professional. In fact, their sense of timing proved to be quite uncanny, as just after they’d left a small but vital part of the Studer machine that you can see me using in the clip decided to actually MELT...

One week before our #LMOTD performance for @AntiqueBeat and @suzettefield, and we’ve had a minor bereavement of our own… pic.twitter.com/MH56A4Ro2o

It will be several weeks before the replacement part turns up and she’s ready to spool again. But it gets stranger: Several hours later in the German town of Halle, Howlround co-conspirator Chris Weaver experienced exactly the same phenomenon with a machine of his own! Seriously, in five years of working with tape we’ve never once had a pinch-roller do anything other than the pinching and rolling that is required of it. Then suddenly two of them melt on different machines in different countries on a single day! What are the chances? Unfortunately Chris came off rather the worse, as his own personal meltage incident occurred live on stage during a Resonance Radio Orchestra performance. I had just turned my back for three minutes while boiling the kettle.

Such an unlikely coincidence will hopefully mean there will be no further meltdowns for at least a couple of weeks, especially because after this Sunday’s adventures in Brompton Cemetery, Howlround are going to be playing Halle on October 16th as part of the Radio Revolten Festival, alongside Chris Cutler and Víctor Mazón Gardoqui. Details of this and a full schedule of events can be found at the Radio Revolten website. There’s also talk of an appearance at the Museum Of London, but more on that in due course.

And lastly, we come to the latest Near Mint show on Resonance FM, where this week we delve deeply into the world of ‘Rhodesian Communications’ through a brief investigation into the work of composer Sam Sklair. We’ll be listening to alternating extracts from two albums on either side of his lengthy career, 1965’s tourist-baiting Rhodesia: Safari On Sound and 1988’s corporate video soundtrack Interplay – The Communications Industry. 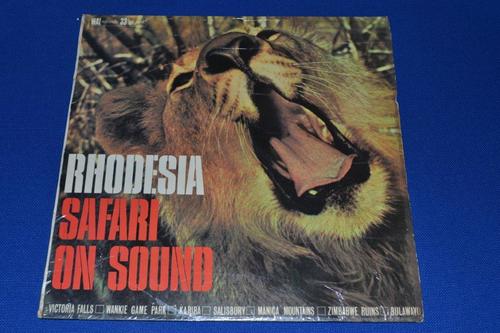 Hard to believe that a mere twenty-three years separate these two records or that they come from the same world, let alone the same composer, but I do like to think that you can hear a similar optimism and search for progression in both of them – after a fashion, at least. Curiously, despite featuring a narrator that makes Alan Whicker sound like a bingo-caller and its evident pride regarding the modern embellishments ‘from strip tease to parking meters’ being enjoyed by a nation that stopped existing quite some time ago, I’d almost be tempted to say that Safari On Sound has dated better. But then I remember the considerable debt that contemporary artists such as Oneohtrix Point Never and James Ferraro owe to albums such as Interplay and I’m less sure. Besides, the latter has just about one of the greatest covers of all time. Design like this NEVER goes out of date:

Well, that should about do it for now. Hope to see you on Sunday. And don’t forget to order The Blow!

Postscript: For the avoidance of doubt, I feel I should clarify that it was a Garth Brooks CD that Kaitlyn was enjoying, not actually Garth Brooks himself. Though I’m sure if he had come along they would have got along famously. In hindsight, maybe we should have invited him? Bet he would just love to collaborate with Howlround!