For those of you who couldn’t make it to today’s panel discussion, ‘Is Sound The Forgotten Sense?’ that was part of a series of talks at this year’s 100% Design showcase, please enjoy this sonic portrait of Kensington Olympia that was unveiled as part of my presentation:

Should architects and designers think more about using sound in new and exciting ways, rather than only focusing on acoustics? Our speakers all use sound innovatively from those that ‘play’ a building, to creating soundscapes that react to spaces and engage audiences in new ways. The panel includes Martyn Ware, founder member of iconic bands Heaven 17 and The Human League, who now creates 3D immersive audio landscapes with architects, artists and brands through his company Illustrious, designer Tomas Klassnik, and sound artist Robin the Fog, who will create a bespoke sound design for 100% Design. Chaired by David Michon, editor of Icon.

You might remember I blogged quite excitedly about visiting Olympia back in August and being given free reign of the building to explore and record. At the time the venue was a blank canvas being cleaned, maintained and generally prepared for this major four-day exhibition. The above work, commissioned by 100% Design derives from making a series of recordings of the naturally-occurring sounds of the building at work (band-saws and other tools, scissor-lifts and other maintenance vehicles, cleaning brushes etc.) along with various objects that I came across on my travels round the building, including doors, windows, temporary fencing, coat hangers and so on. The staff were kind enough to then let me take these recordings and play them at high volume through the venue’s PA system, using Olympia’s high arched ceiling as a giant reverberation tank – the biggest space I’d ever had the pleasure of working with and a glorious cacophony that somehow didn’t distract the cleaning staff from their appointed tasks one bit. Who knows, perhaps this sort of thing is a regular occurrence?

…And to think until today I’d never heard a recording of my thumb amplified through the public address system of major exhibition venue! 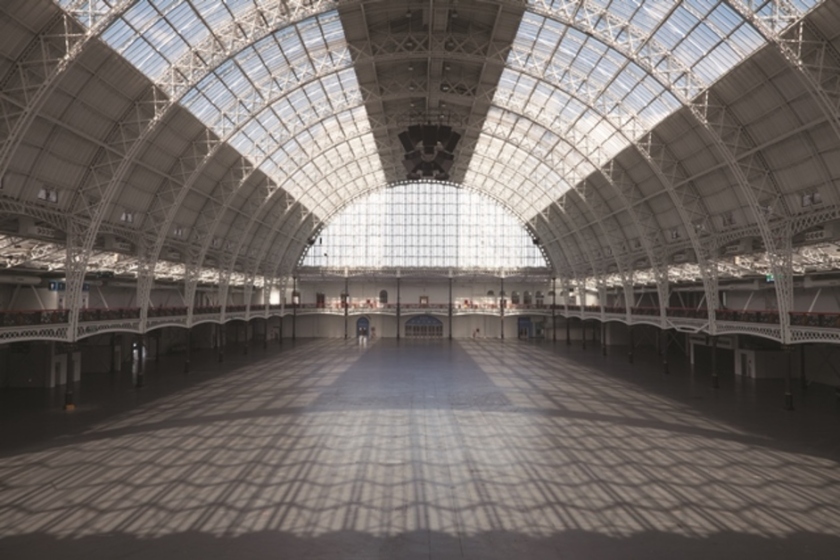 Thanks to 100% Design for having me, to Martyn, Thomas and David for being such fascinating company and to everyone who expressed an interest in my work. Sadly, due to some sort of annoying technical hitch I was unable to play an extract from Jacob Kirkegaard‘s 4 Rooms, which was a tremendous shame as it was a terrific example of one of the points I was trying to make about working with particular acoustic spaces – is it pure coincidence that these recordings of abandoned public spaces in the Chernobyl sound so desolate, lonely and foreboding, despite being in essence just recordings of amplified silence? Or does our awareness of the tragic history of these rooms and the inherent dangers of returning there have a part to play?

Here it is, anyway, and you’ll find more information on the album here. Still makes me shiver…