Power Lunches In The Psychoacoustic Country

A rather hurried post today, starting with an extract from Howlround‘s final gig (for the time being) at The Electric Dog Show, Power Lunches from earlier this month. It’s a ‘greatest loops’ set of sorts, so you may hear a few of our favourites alongside some brand new material, of which we now have rather a lot. We really do need to start knocking it all together into that album we’re supposed to be getting on with:

You can read a very complimentary review of the entire event (including superb sets by Quimper and Gyratory System) by Michael Holland (who we also have to thanks for these lovely photos) on the Ears4Eyes blog, but I’ve taken the liberty of quoting the paragraph pertaining to ourselves here:

‘Howlround were amazing, perfectly eerie, a droning, revolving yawn of sound, a morass of crumbling noise, whale moans, the distress of slowly compressing hulls and skulls, they conjured a hard to place melancholy – perhaps from the knowledge that the tapes and machines are at the end of their lives, still vibrant but with numbered days.  Long strands of tape spun around stands, the duo stumbled around the flickering web like spiders, the audiences’ minds caught and bound, constricted further with each passing minute.  A ballet of thread-hanging twirls, or a pair of tape-architects measuring drone boundaries for fencing-in sound-ghosts…

In other news, a most flattering post regarding Howlround’s debut album The Ghosts Of Bush (as well as a few other bits and pieces from the Foggy Archive) appeared this week on the excellent A Year In The Country website. Filed under ‘Trails and Influences / Other Pathways’, it’s the latest of the blog’s extensive investigations into ‘the underlying unsettledness to the English bucolic countryside dream’, and proves as immersive and well-researched as ever. This is amply proved by the fact that they dug out this home-made press release I’d forgotten ever making:

And lastly, to pile glory upon glory, ace music curators and Boomkat offshoot 14 Tracks have included ‘неизвежбан‘ from Howlround’s second album Secret Songs Of Savamala in their recent selection ‘Psychoacoustic Geography‘. It’s the second time I’ve been featured on one of their regular download compilations, each one centred around a specific theme; and this latest selection also features work by Ingram Marshall, Moondog, David Toop, Janek Schaefer and Anne Guthrie amongst many more! Very proud to be in such company, particularly as the reissue of ‘Fog Tropes’ on Arc Light Editions is, entirely predictably, my favourite reissue of the year to date and one of my favourite releases full stop. And so, as Howlround prepares to head back underground to concentrate on finishing albums and shunning the spotlight (and as Chris prepares to head to Dubai – thus making the project a truly global concern), we appear to be experiencing one last flurry of welcome publicity. Hopefully this will keep our enormous fan-base happy long enough for us to get our act together and finish the three album’s worth of material we currently owe various people. Best foot forward, then.

For those of you who somehow found last Sunday afternoon’s weather conducive to doing anything other than staying in and listening to the radio (and found themselves lacking a smartphone or internet-ready umbrella), I’m very pleased to inform you that the latest edition of the Alien Jams show on NTS Radio featuring SPECIAL GUESTS HOWLROUND!!! (my caps) is now online for your streaming pleasure. We took the opportunity to road-test some brand new material from our as-yet-completely-unfinished next release, and indeed a sizeable chunk of airtime was given over to brand new works fresh off the spools, plus at least one new piece that will probably never be heard or referenced ever again. It’s something of a departure from our previous LPs, but we think it fits into the Howlround niche quite nicely. Dig in, won’t you?:

Extra special thanks to host Chloe Frieda and producer Padraigh for having us and make sure you pre-order the new LP from Ommm, coming soon on the Alien Jams label!

There’s other news this month, both very good and slightly bad. The very good news is that we’re excited to be playing The Electric Dog show at Power Lunches in Dalston on May 7th. Brought to you by Soft Bodies Records, we’re playing alongside Quimper and Gyratory System and it looks set to be yet another killer line-up to be slotted into! Further details here and there’s also a Facebook Event Page as there so often is with these modern events. The slightly bad news is that this will be your last chance to catch Howlround live for the FORESEEABLE FUTURE! 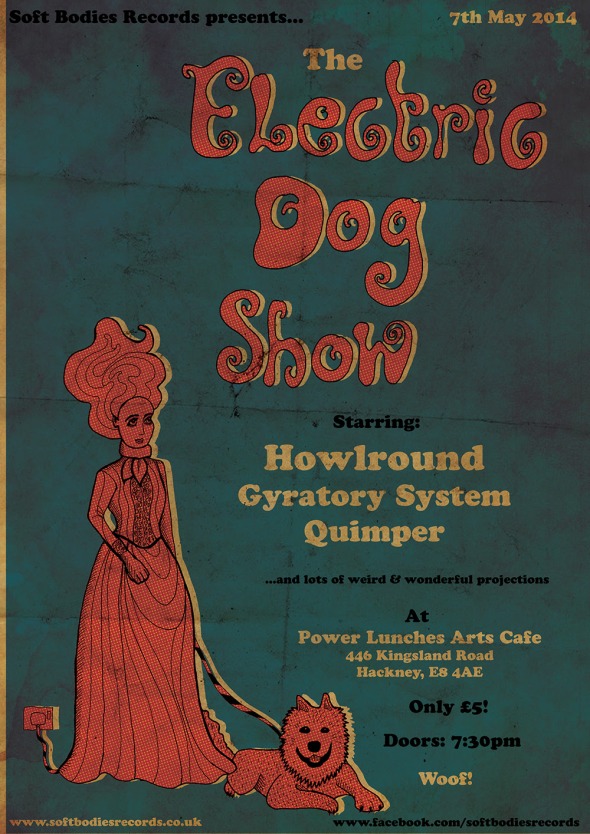 But before your throw up your hands and commence wailing and gnashing, I must reassure you that this is by no means the end of the our tape loop adventures, though given that I’ve just been boasting about playing exclusive new material from a forthcoming release, you may already have picked up on that. Aside from avoiding very real damage being caused to our quartet of Revoxes every time they leave my studio (not to mention our spines!), we’ve decided that now is a good time to hunker down and concentrate on building a solid repertoire of tape music while they still just about work. That way, when each machine is assumed into Revox Heaven (and the day cannot be that far off), we’ll have lots and lots of material in reserve that we can release posthumously in a steady drip-feed, while raking in the cash. A bit like Tupac. Oh, and Chris is moving to Dubai. Did I mention that?

So, a bit of a change on the horizon. I must admit I shall greatly miss jamming with my indispensable partner-in-tape who has bought so much to the project over the past year; but work will continue thanks to the wonders of THE INTERNET and we’re both very excited about where things are going (quite literally, in Chris’s case). I hope that after a listen to the new material on the Alien Jams show you’ll be just a little excited too. Just a little…