Very excited to announce that our guest on Resonance FM’s Near Mint show this week is the one and only Mr. Luke Vibert. Otherwise known as Wagon Christ, Plug, Kerrier District, Amen Andrews and a whole bevy of other pseudonyms, Luke hails from Cornwall and was originally part of the county’s fabled 90s electronica scene alongside long-time friend Richard D. James and members of the legendary Rephlex Records.  Releasing numerous albums on that label as well as Warp, Ninja Tune and Planet Mu to name but a few, his discography is as long as both my arms and includes house, disco, acid, jungle, hip hop and all kinds of joyously leftfield squiggly stuff in-between – and I do personally think ‘squiggly’ is the best way to describe his multifarious output.

His reputation as a DJ and crate digger precedes him as well, so when we got in touch and asked him to pull only the weirdest records out of his magic box, we knew we’d be in for a treat. And so it’s proves: A Gala Performance, a Karate Robot, an ultra-rare and complete bats**t-crazy outtake from the Jungle Brothers, a visit to Borstal, an equally bats**t outburst from the Stardust Cowboy and the never-more-haunting theme from Picture Box to round things off – by pure coincidence it’s second appearance here in the last few weeks. A loose theme for the show might be ‘records that probably shouldn’t have been made – but thankfully were’. Anyway, it’s a joy and a privilege not only to have Mr. Vibert on the show but to use this as an excuse to share the above vintage photo nicked from one of his Discogs pages, of which there is surely nothing more to be said. By his own admission Luke doesn’t really do social media, so I’m hoping it will be up here quite some time before he notices and demands I remove it. Must say that it’s certainly convinced me to include at least one owl in the next Howlround photoshoot…

Speaking of Howlround, I’m playing a solo tape loop set at Bad Timing’s ‘The Other Side – An Audio Séance’ in Cambridge tonight, but I’m reliably informed the gig is sold out and the tickets are waiting-list only, so there’s not much point in my trying to convince you to come along. Really looking forward to it, however, as it also includes performances from English Heretic’s Documents project and Evie Salmon and James Riley performing ‘Dust’ (plus DJs and hopefully cold beverages).

I’m keeping today’s post relatively brief as I still have to dub off some fresh loops for my set and go do my heroic Buster Keaton routine juggling a heavy suitcase full of gear against a desperately ticking clock and a rush-hour train. Plus I’m still getting over this rather nasty cold that laid me up for the best part of last week and has resulted in my ‘to-do-eventually’ list swelling to monstrous size. With Howlround shows in Cambridge today and Cardiff in a couple of weeks plus a number of radio packages that require my golden touch (I currently have three in the works and one in the wings), it’s going to be snotty-nose-to-the-grindstone for the next few weeks, which I’m hoping will at least clear out my sinuses. Allow me to close for now by tying things up neatly with my all-time favourite Luke Vibert track that salutes another great town not too far from Cambridge, 2001’s ‘Kings Lyn’ from the Ataride EP on Ninja Tune. For some reason nobody ever seems to mention this track when discussing his work, but I think it’s one of the most delightful pieces of modern electronic dance music made by Luke or anyone else. Having dated far better than much of his contemporaries output by sounding oddly timeless, I do love how the different elements of the track seem to whirl around each other and how the chopped amen break flips and contorts but never loses the funk. Completely squiggly – am I right?!

Presenting the first episode of Near Mint, a brand new Resonance FM series, Tuesdays at 1800 GMT on record collecting, record collectors and the compulsive and foolhardy pursuit of blowing all your earnings on the pursuit of strange and obscure vinyl, a subject I consider myself something of a scholar. Presented with my old Resonance chum Hannah Brown, this first edition is the first of a two-part special recorded inside the record room of Strictly Kev aka DJ Food. In anticipation of his star-turn at our ‘Digging Deep’ Resonance Fundraising Night at the Book And Record Bar in West Norwood, on February 19th, we thought it might be fun to  have him to spill open his secret record box and allow us a peek into the contents. Playful psychedelia, cut-ups (metaphorical and literal), locked grooves, direct-to-disc booth recordings, children’s songs about the elements… The results were far too good to contain in a single half-hour programme, so part two will follow at the same time next week. Here’s what we played:

A little post-show detective work revealed the above ‘Auto Recording’ to be a rather lo-fi cover of this. Though I must say I prefer our unknown friend! When was it recorded? Where? And who was this unknown motorcycle enthusiast? It’s the fact that we’ll never, ever know that gives it it’s savour!

Many thanks to Kev for not only pulling out such incredible treasures, but for taking the time to photograph the sleeves and send them over so that you can enjoy poring over as much as I did! And to cap it all he’s only gone and designed us a new poster for the fundraiser as well! If all this classy material doesn’t encourage you to come down on 19th, nothing will! 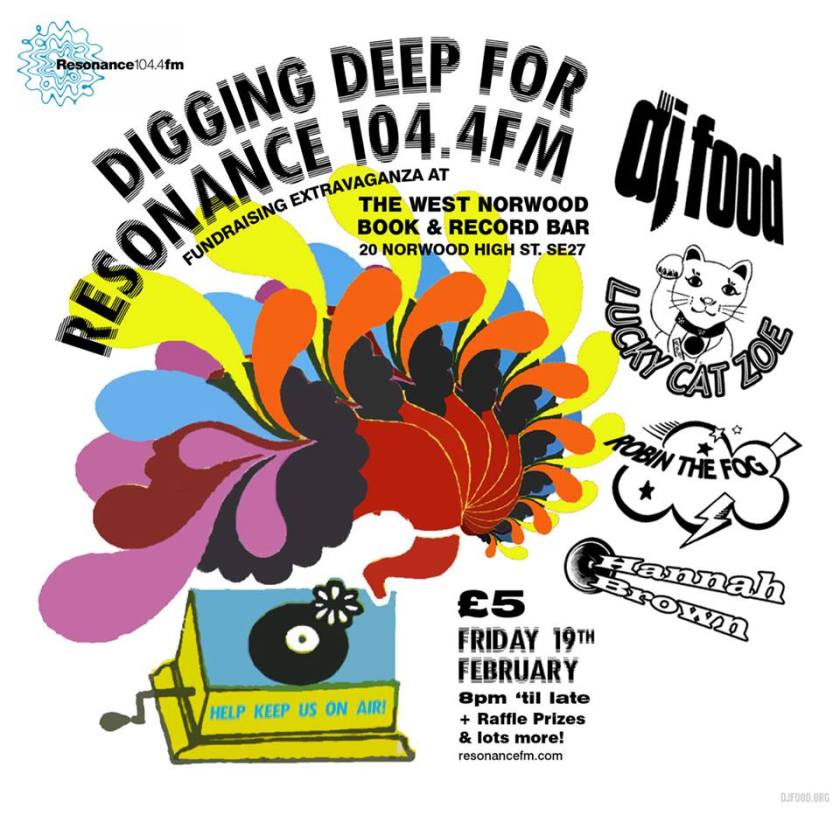