To celebrate my heroic non-inclusion in this year’s Record Store Day, due in no small part to failing to get my affairs in order, I was planning to use this week to spring something exciting onto a grateful world: namely a surprise vinyl reissue of Howlround’s third album Torridon Gate, in an edition of 100 only, complete with gorgeous screen-print of the sleeve by Hannah Brown of Modern Day Magpie and a natty translucent inner. However, thanks to the noble efforts of the good folk on my mailing list, I’m unable to do so…

The fact is, I sent my subscribers an email last week giving them first dibs on the new record and they literally bit my hand off – the entire edition sold out in less than twelve hours! 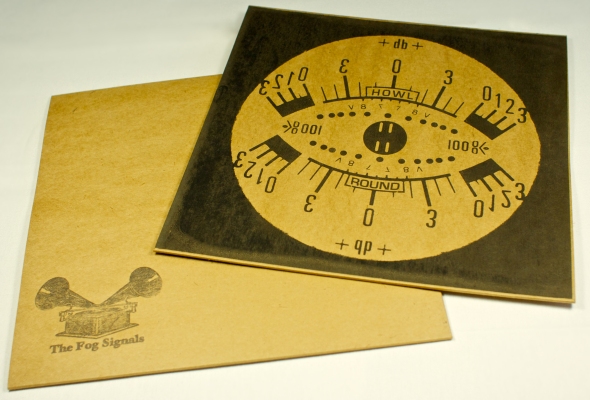 Sorry to disappoint those of you who missed out, but that really is your lot! The ‘name your price’ digital download is still available, but the number of regretful, peevish or outright inconsolable missives I’ve received in the last few days tells me it’s proving little consolation. However, the fact is that in my original email I promised it would be first-come, first-served, with no second edition and no re-reissue. And I intend to keep that promise until such future times as when it will prove especially financially lucrative to go back on my word and let everyone down – a major career retrospective, perhaps, a deluxe vinyl box set in mahogany, a nomination for the Mercury prize, that sort of thing. Frankly, such worries are quite a way off yet – not much point having a major career retrospective without having a major career first. But I digress…

I do plan to spring other surprises in this manner in the future as it’s quite an enjoyable (if not particularly lucrative) way of running my affairs and keeping my followers on their toes. If you’re not yet on my mailing list and gaining such preferential treatment yourself, why not send an email with the subject line ‘Yes! I wish to be kept on my toes re. this kind of thing in the future’ to robinthefog at gmail dot com? I will take care of the necessary and first dibs on my next vinyl surprise will be yours for the taking!

To Radiophrenia news now, and congratulations to Mark Vernon and his team for the culmination of a successful week of broadcasting to Glasgow and the surrounding areas on 87.9FM (while streaming worldwide online), with a wide and varied programme of original radiophonic works, lectures and performances, including a couple of new works by myself (along with the writer Leila Peacock, of course).

I’m extremely proud to report that one of them, ‘Mount Shock – Music For Microphone Cradle’ was chosen as the work to mark the final broadcast, signing-off and closure of the station at roughly ten minutes to midnight on Sunday 19th. Quite an accolade with over seven hundred pieces to choose from! 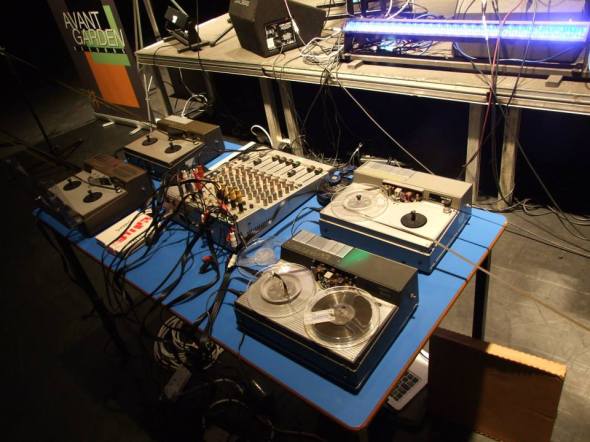 Penultimately, the Howlround tape-loop quartet finally came out of dry-dock last week when I performed a solo set (Chris still being on his arts residency in Dubai) for the music technology students of Havering College in Essex. It was good to be back behind the spools and the students responded well to my demonstration of what it’s possible to achieve without resorting to plug-ins, fx pedals and other bits of digital technology. In fact it went so well that for a moment I almost felt ‘cool’ and ‘relevant’, but thankfully those feelings passed before I attempted to get too far ‘down with the kids’. Could have been seriously embarrassing for a chap of my vintage.

And lastly, I’ve moved house too. 80+ boxes of vinyl, tape spools CDs, books and other assorted ephemera (not to mention my army of tape machines) have been successfully transferred to my new abode in Penge, thanks to the efforts of some very strong friends (both literally and metaphorically). This photo was taken at about the halfway point, when there was still some floor-space in which to stand swinging a camera. No such luxuries now. I haven’t seen the carpet since: 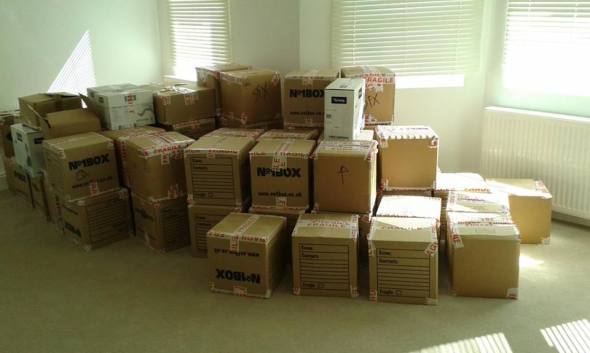 There are those who claim that moving house, performing a Essex-based solo tape-loop set and releasing a new record in the space of less than forty-eight hours is sheer, unadulterated lunacy. And you know what? I wouldn’t dream of arguing with such people. The upshot of all of this is that I’m currently sans-internet at the newly-appointed Fog Towers, which is why I’m writing this while day-drinking in Crystal Palace, next to two men engaged in a fascinating discussion about why it’s never a good idea to take cocaine at a funeral. If you’re thinking that sounds rather like stating the bleedin’ obvious, I should inform you that some poor misguided chump once offered me viagra at the send-off of a much-loved elderly relative, so perhaps such activities are more common than you or I might imagine. But all that’s for another time…

Anyway, for these reasons, and all of the above, it’s an exciting time. More soon, my friends, and don’t forget to subscribe if the mood takes you!

Howlround are hereby deeply proud and very excited to be officially announcing the release of our third album Torridon Gate on cult blog and record label A Year In The Country! Today’s post is in entirely black and white in tribute to their stark and arresting sense of aesthetics – and arrives only a full week after the album actually came out, but I think you’re about ready by now.

So, Torridon Gate, then. I’ve been told it sounds like the title of a lost novel by Philip K. Dick. But as it happens the thinking behind that title is actually rather prosaic – all of the music on this new album was created from a single recording of a suburban garden gate on Torridon Road, Hither Green, London. And that’s it. We attached a contact microphone to the metalwork of the gate and recorded as it opened and shut and moved in the wind. These sounds were then processed, looped and edited on three reel-to-reel tape machines with all electronic effects or artificial reverb strictly forbidden. Despite such restrictions and the limited sound palette in comparison to our previous work, we like to think the results are as haunting and beguiling as anything from our other albums, shifting from ethereal tone-patterns to demonic scrunches and back again. It’s certainly a long journey from the pleasant suburban street where it all began. Who would have thought a single ‘common or garden’ gate (pun intended) could offer such hidden wealth? Well, perhaps these two had an inkling: 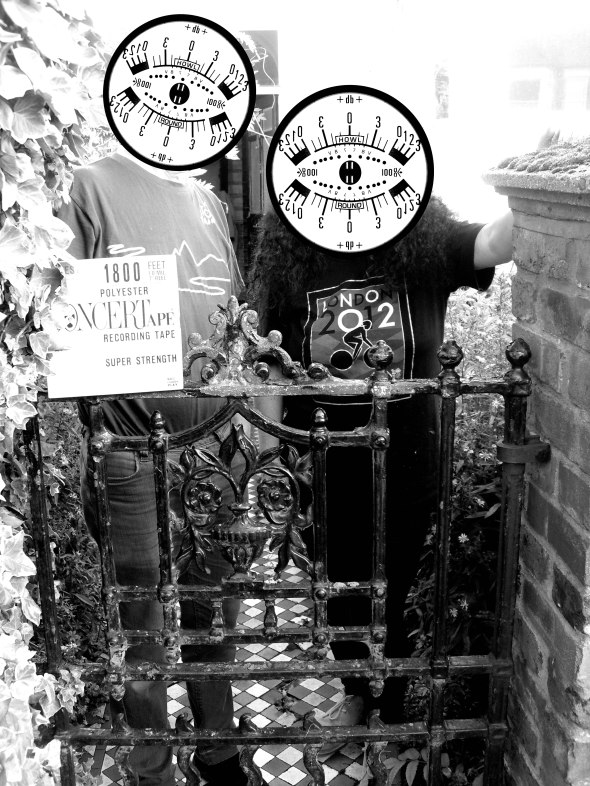 Gate Owners Tony & Kath with the Torridon Sessions master tape. We actually recorded almost an hour of new material – including around the house – but it’s only fair they should have SOME exclusive work for themselves!

The project started life as a prize on Resonance FM‘s most recent annual fundraiser, but quickly spiralled upwards and outwards. Perhaps you remember our ‘Howlround’s Home Haunting‘ auction item back in February, where we offered to provide a unique sonic portrait of the dwelling place of the highest bidder? Well, our thanks and gratitude must go to gate-owners Tony Alpe and Kathryn Everett, not only for a very generous winning bid (every penny of which went towards keeping Resonance on air, of course), but also for allowing us to share the results! ‘The gate was one of the things that attracted us to the house in the first place!’ says Tony, and hopefully after listening to this album you’ll join me in fully concurring with this statement!

Actually, there’s been a fair amount of concurrage (as it were) already, and I’ve included below a couple of extracts from my favourites so far (click on the link to read the whole review), In fact, feel free to send in some feedback of your own – if it’s particularly obsequious I’ll share it!! 😉

“The result – a modern piece of musique concrete – is extraordinary, like the soundtrack of an old horror movie of the 50s, a fog of sounds in sepia tones that seem to emanate from another time” (trans.) – Rui Migel Abreu, 33-45.org

“Is it a portal to other worlds, a site of ghostly hauntings which follow on from the car crashes which resulted from not paying attention to all the road safety films… or perhaps the passageway between the galaxies that Quatermass must pass through in streaks of video feedback and ominous lighting effects in order to save London from a fate worse than Edward Heath?” – Richard Fontenoy, Freq

Now for the fun part. Written below are three statements, each as inherently plausible and theoretically sound as the other. And yet only ONE of them is factually accurate. Can YOU, dear reader, separate the wheat of truth from the chaff of falsehood? Read on: 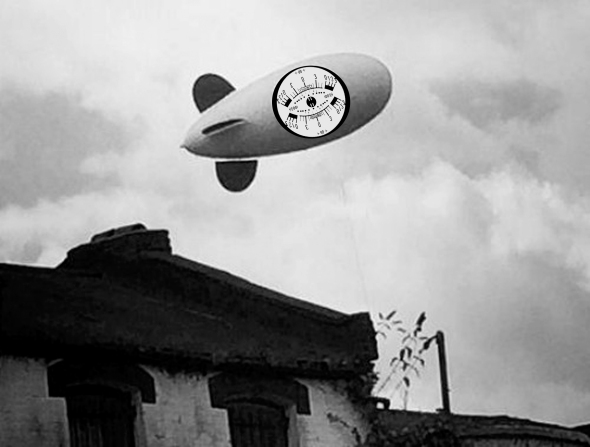 I admit, it’s tricky – they all just sound so entirely likely, don’t they?

Answers on a postcard, please….

So, after months of labouring away in secret, here it is. Available now in a series of four beautiful limited editions from A Year In The Country, the label and blog that has developed a cult following through its continuous ‘searching for an expression of an underlying unsettledness to the English bucolic countryside dream’. Each edition – Night, Day, Dawn and Dusk – comes with a selection of unique hand-finished artwork and packaging, while the Night edition also includes a selection of badges, sections of the original tape loops used to make the album and more. All are available now from AYITC’s ‘Artefacts Shop’ with a download also available for those who no longer meddle with discs. We’re really proud of this one and hope you’ll like it too!