It’s been rather quiet on these pages the last couple of weeks, though I can assure you in the off-line actual world things have been busier than ever. Much of our time has been taken up finishing off the next Howlround project – we’ve been beavering away at in secret for a couple of months now, it’s pretty much finished and sounding quite super;  just waiting for our mastering guru to work his magic. We’ve also got a couple of rather exciting live appearances coming up in August – our first in several months – with details to follow. But for the moment our most pressing item concerns a typewriter and some tunnels: 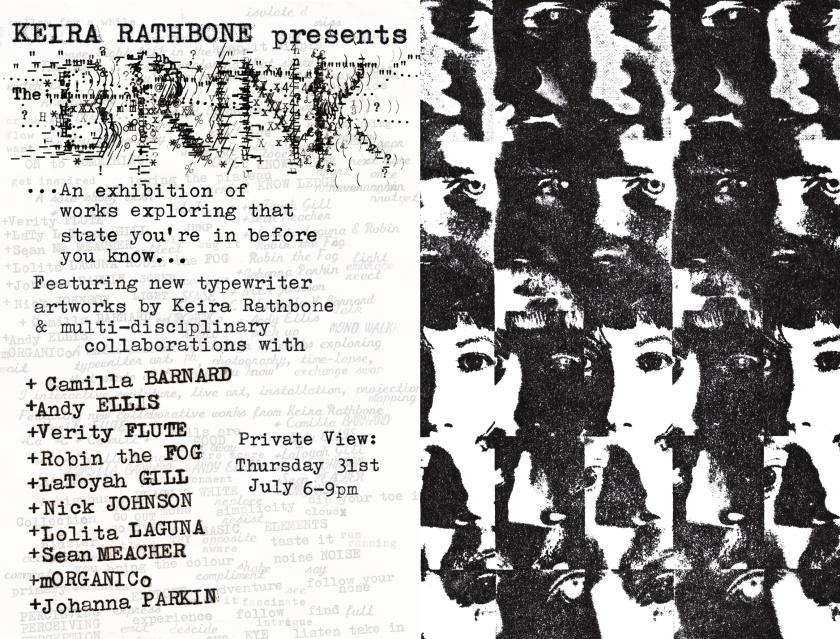 Yes, celebrated typewriter artist Keira Rathbone‘s latest exhibition BRINK comes to The Vaults gallery at the end of this month and features a number of collaborations with artists of different persuasions alongside her own distinctive works – including a new sound piece produced by Lolita Laguna and myself. Our contribution was produced several weeks ago by visiting the cavernous halls beneath Waterloo station that make up the exhibition space, armed with some recordings of both Keira’s typing (she uses a contact microphone which makes it sound tremendous!) and the ambient sounds of some of the locations where she produces her work; such as the river bank of her native West London. These sounds were played  through a portable amplifier placed at one end of the vault known as the ‘long wet room’, with the results being recorded at the other. This new recording was then played back into the space and the process repeated – five times!

It was an idea partly inspired by works such as Alvin Lucier‘s I Am Sitting In A Room and Jacob Kierkegaard‘s wonderful and terrifying 4 Rooms, where continuous recording and playback within a given space starts to expose that space’s natural resonant frequencies, often rendering the source material completely unrecognisable as it does so. This kind of transformative-process and the ease with which it’s often possible to break down common or everyday sounds into something wholly other is, as regular visitors to these pages will attest, an obsession of mine;  though even I was astonished at the metamorphosis that had occurred by our fifth attempt. And because of the continuously ‘active’ nature of the space, each subsequent layer added it’s own  flourishes; be it the sporadic water dripping from the ceiling or the bass-heavy rumble of train wheels overheard. At the time of writing Lolita is putting the finishing touches to this dense sonic stew and the resulting composition will be installed in the space as part of the exhibition, premièring at the private view on July 31st. The rough-cut sounds great, so I’m very much looking forward to hearing the finished work being ‘put back’ into the space. Seems only yesterday I was doing the same thing in Belgrade customs house!

To celebrate the launch of BRINK and as a promotional wheeze, Keira has set about immortalising the assets of her various collaborators by producing typewriter portraits of their eyes and ears. To that effect, here is a picture of her posing with my left ear, a salute not only to a body part described as ‘damn sexy’ by someone on the internet; but to an organ that has consistently earned it’s place as my very favourite and most-useful physical accoutrement:

Anyway, I’m sure I don’t have to tell you that Keira’s work is amazing (as is Lolita’s!!), so make sure you pay the exhibition a visit somewhere between 1st-23rd August.  The official Vaults website has further details and there’s also a Facebook event here for you social media types. She has even suggested we have a DJ battle as part of the private view, so there may be one further collaboration to come!

Finally, outside of the vaults I’ve been immortalising some assets of my own, chiefly by making another ‘guerilla’ promotional video for Howlround using my favourite tape loop, which sadly expired from sheer exhaustion not long afterwards. Thankfully it’s appearance in this video has given it a kind of immortality, so why not click play and help a small part of it to live forever? Moreover, particularly as the sounds in this video have gone on to form the cornerstone of our next release, why not watch it over and over and over again? In doing so you’ll increase our play-count and be granted rare insights not only into how the loop came to meet its end, but also just what I have been doing with my evenings over the past few weeks.  You might even gain a teasing-yet-fascinating glimpse into our new release’s gestation – everyone wins, most of all YOU!