There are those who would howl with derision at the thought that in the teeth of a gigantic recession anybody would be hare-brained enough to set up a label specialising in releasing obscure sound art on out-moded formats. And believe me they do howl. In fact, even I was surprised at the amount of snarky comments generated by certain members of my showbiz circle upon announcement of the launch of my brand spanking new imprint, The Fog Signals. Still, I never was much good at doing the sensible thing, and so here it is, our inaugral release. Snark on this:

Yes, friends, it’s finally arrived – ‘Notes On Cow Life’ by Guy J. Jackson & Robin The Fog! Perhaps the most hotly-anticipated limited edition sound-art cassette of the year, it contains thirty fabulous minutes of noise, prose and profanity, courtesy of the bendy, subversive stories of Hollywood legend and former American Idol contestant Guy J. Jackson bolted onto the warping and wefting sound design jiggery-pokery of Robin The Fog. It contains 10 of Guy’s fruitiest stories and many a doabolical twist and turn along the way, as well as some of the meatier offerings from my big sound cupboard. And 50% of the profits are going to charity!

Released as a limited edition bright orange cassette, the colour of cheerful madness; ‘Notes On Cow Life’  is limited to a mere 50 hand-numbered copies, though if you particularly object to things that exist in a tangible state, it comes as a download too. And if you’re not quite sure where you stand between the poles of tangibility and convenience, you should know that all purchasers of the cassette get the downloads thrown in gratis. The download, being a intangible object, is not limited at all and will go on being a download long after all the cassettes have been bought up by screaming admirers. Although tape enthusiasts are rewarded for their lifestyle choice with an exclusive secret bonus track at the end of side B! 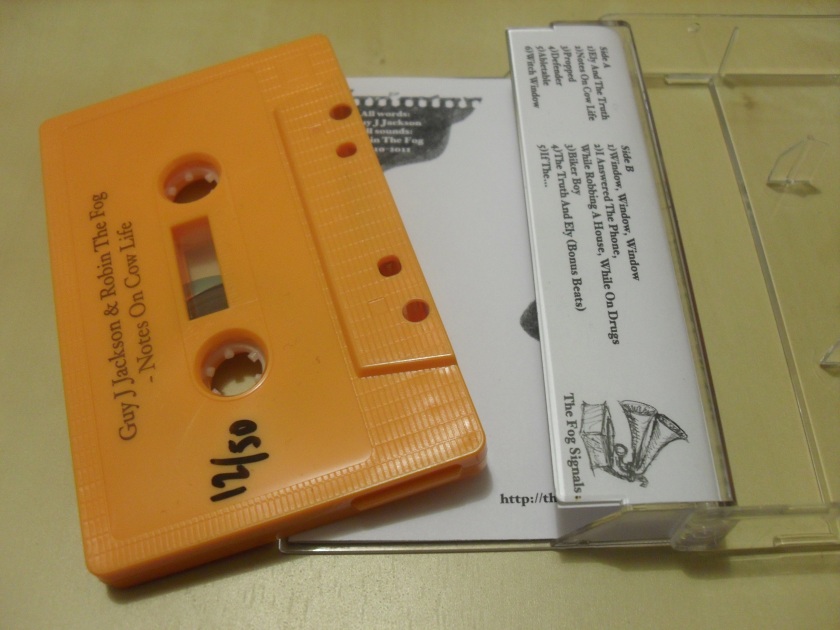 On the subject of charity, I can also confirm that for each cassette sold, we’ll give 50% of the proceeds to thoroughly worthy ‘People Live Here’ organisation, who are doing some amazing work bringing the plight of the residents of Port Harcourt, Nigeria to the eyes of the world. You can find out more about their attempts to creative a ‘human city’  and about how you can help by visiting them here.

But for now, sit back, fire up that vintage walkman someone gave you as a retro Christmas present, and enjoy half an hour of magic and intrigue, safe in the knowledge that in some small way, you helped make the world a slightly better place. As an added bonus, Guy even found time to make a video for one of the tracks:

Further releases on The Fog Signals to follow soon. With accompanying levels of snark, no doubt. Still, my back is broad…