Hello you. First off this week, I’m attempting to clear the decks in preparation for the next Howlround project, due sometime in early 2018, so it seems like an appropriate moment to share this youtube video of a work in progress that I uploaded several months ago and then promptly forgot ever making:

If memory serves correctly, I was testing out some new material with footage I’d made during a trip to Sri Lanka earlier this year and I remember thinking that the sound and image made surprisingly natural bedfellows, despite having very little in connection with one-another. I have absolutely no idea what the source material for the soundtrack was, but I would imagine it was from creaking recordings similar to the ones used on the Psyché-Tropes LP. I also have the feeling there was some birdsong thrown in, but I honestly can’t remember – I’ve had a sleep since then, as my dear old Gran used to say. One thing I can tell you is that no voices were involved, even though it might sound like a drowning opera singer in places…

I’ve also just been sent some images of The Quiet at Abney Park Cemetery Chapel from a couple of weeks ago and thought I’d share them here. A memorable event, another unique venue to add to my ever-growing list and a great pleasure to be involved, particularly the moments where myself, Jenni Roditi, Charlotte Chw, Adam Kinsey and chief strategist Sam Enthoven all improvised live together for the finale. Thanks must also go to Rucksack Cinema for the projections, Zoe Plumb for rolling up her sleeves and making things happen (as usual!) and of course Lucy Brady for the super photos:

It’s been a quiet week on these pages as I’ve been away in the Highlands, collecting sounds and soaking up some culture, so the next few days at Fog Towers are going to involve quite a bit of nose-related grindstone action, while I file my latest BBC report and attend to some editing work that’s been simmering on the back-burner during my absence. What’s the subject of my latest BBC mini-feature, I hear you cry? Well, it’s a bit of a surprise, but I’m quite excited about it and will hopefully be revealing all soon (metaphorically). In the meantime, feel free to check out my recent piece on the subject of last week’s Captain Beefheart symposium at Liverpool’s Bluecoat for Radio 4’s ‘The World Tonight’ here (the item starts at exactly 39.30 and closes the programme). I meant to share it with you last week, but it turns out Loch Ness lacks decent wifi almost as much as it lacks any sign of prehistoric beasties.

On a more sensible note, if you happen to be in the vicinity of Edinburgh in the near future, do be sure to head to Scottish National Museum Of Modern Art and check out Susan Philipsz‘ multi-turntable sound installation Seven Tears, on display in ‘Modern One’ until February 18th. A quietly stunning work, in which the drifting glacial tones played on a series of clear vinyl discs randomly blend and beat against one-another, it was one of the biggest highlights of my trip. Well, that and a quick spot of crate-digging in good old Underground Solu’shun on Cockburn Street. It would have been rude not to pop in!

And finally, I must give a quick plug to the latest release from Belgrade’s excellent Discom label, which arrived in the mail while I was away. Run by audio-archivist husband-and-wife team Luka and Vanja and dedicated to giving the forgotten electronic and experimental musics of the former Yugoslavia ‘a second chance’; they’re following up recently issued lost ambient-prog classic Sidarta by 37°C and 2016’s superb Yugoslavian Space Programme compilation with Could You Find Your Analog Mind? by 1980s Serbian synth-tinkerers DATA. It’s out now and available from all reputable outlets. And it’s bloomin’ marvellous. 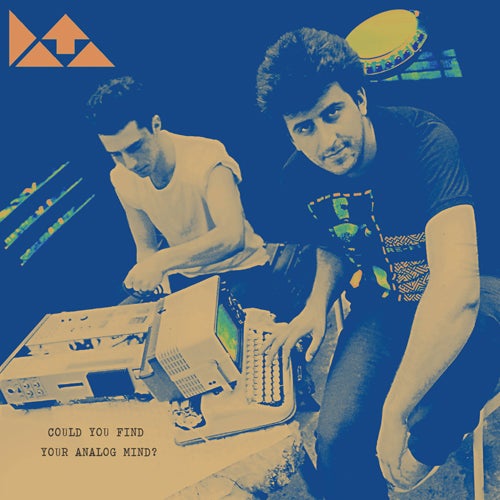 A collection of electro-pop nuggets recorded by the group between 1981 and 1984, these tracks were once thought lost forever, and it’s entirely thanks to Luka and Vanja’s stubborn determination in tracking them down that they’re seeing the light of day at all. The results are a revelation – it’s astonishing to think that this material has been sat on various shelves for over thirty years, never considered worthy of a release before now. Seriously recommended for fans of contemporaneous groups such as Yellow Magic Orchestra and Telex, or perhaps the early 80s LPs  of the Bruton Library, and of course 21st century synth scholars such as Datasette and Max Tundra. Limited copies available, on beautiful heavyweight blue vinyl, so click on the images to order yours before they all fly…

All the trappings of first class: Antimacassar, arm-rest, half-table. Still worth it, even if I do end up with a £1000 fine! pic.twitter.com/3nFoJA9dPe

As you can see from the above, I’m now back in London and gradually returning to the standards to which I am accustomed, so normal service should be back up and running before very long. In the meantime, please enjoy this photograph of myself and long-suffering friend Kaitlyn, taken on top of a very windy Arthur’s Seat. For some reason this image puts me vaguely in mind of the sleeve of Hi Scores by Boards Of Canada, so I’m now thinking the two of us ought to make an album of spooky Scottish electronica together. Unfortunately she’s really more of a Garth Brooks kinda gal, but stay tuned and perhaps I’ll be able to bring you some concréte-country developments at some point in the not-too-distant future. Keeping my shortbread fingers crossed…

PS If you managed to get through this article without sniggering in a puerile fashion at the name ‘Cockburn Street’, give yourself a pat on the back. I swear that’s not how you pronounce it…