My first post in almost a month and I’m afraid it’s another rushed one, mostly playing catch-up and paying some Howlround-related dues. Firstly, Chris and I would like to express our sincere thanks once again to the amazing JP and Ale of 4’33” Cafe for not only hosting us in Barcelona back in August, but for turning the results into this beautiful short film posted onto Facebook. A wonderful souvenir and a perfect introduction to the Howlround live experience! Please enjoy:

Secondly, The Quietus has published a very entertaining review of this year’s Beacons Festival by that most affable gent Jonny Mugwump, including some decidedly favourable comments about Howlround’s late-night tape-loop contribution. You are warmly encouraged to read it in full on their website here, but for our immediate purposes I’ll just modestly quote the flattering bit:

“…[Howlround were] by far one of the strangest sets of the weekend as well as being one of the highlights […] uncanny, mesmerising, difficult and sublime. Utilising vintage reel to reel tape decks, Weaver manipulates physical loops of tape that Robin feeds into the machines. The utterly indescribable sound however is lent extra gravitas through the almost theatrical physical requirements of the performance. There are giant loops of tape hanging everywhere and the delicacy and intricacy of handling them lends the set an overwhelmingly eerie atmosphere. Howlround live is a séance – the act of channelling rendered in physical form. Suitably sonically infected, the night takes on strange shapes and you sit down with new friends knowing that this is exactly what a festival should be about”.

While Mr. Mugwump naturally has our gratitude, it’s also a relief to hear he survived long enough in order to file his report – I’m told the weather really did get rather biblical after we left. In addition I feel I must apologise to him and to all of you for the slight grammatical error I caused while tweeting about it. Promise it won’t happen again:

Finally, my thanks to the lovely and ever-patient Kaitlyn Spillane and my other stateside friends for an incredible three weeks of American adventuring. From the burning forests of Yosemite, to the salt planes of the Mojave desert, the ghost towns, abandoned hillside military encampments, empty motels, ‘wave organs’ (more of which later) – we covered it all.  There’s a huge amount of recordings to wade through and it may be quite some time before I’m ready to share anything, but share it I certainly will in due course. In the meantime, please enjoy this recording of that most iconic part of San Francisco’s soundscape, the foghorns of the Golden Gate Bridge. The extract below was made in the densest fog I’ve ever encountered – despite standing directly underneath the gigantic, bright-red, mile-long, 230 metre-high  structure the bridge might as well have not been there at all. I don’t even think it’s too much of an exaggeration to say that you can hear the fog in this recording – certainly not when you consider the fact that sound does travel differently in foggy conditions. Unfortunately, one sound that travelled rather too well was  that of a nearby trio of wastrels who were so entranced with this mighty display of the elements that they decided to chinwag incessantly about nothing throughout all of  my efforts to capture it. Ah, well, sometimes you have to let the world in. 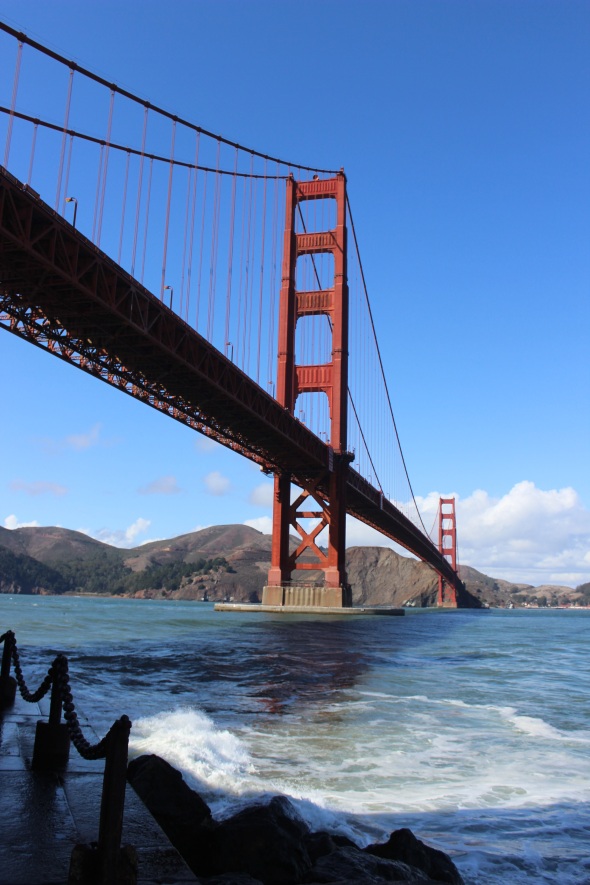 I’m sure I don’t need to explain that this photograph was taken from the same point as the sound recording, but on a different day. But just in case…

Incidentally, fellow Hitchcock devotees might like to know that this was taken from almost the exact same location as the one from which Kim Novak threw herself into the foaming waters of the bay during one of Vertigo‘s more dramatic moments. Listen to the booming of the foghorn over the thunder of the seawash here and I think you’ll get a real sense of just what a poor decision this would have proved:

They certainly wouldn’t have got much filming done on the day of my visit, though nowadays the heightened security measures would have prevented the need for any heroics on the part of Jimmy Stewart. What price freedom, eh?

Thanks to everyone who came to see us HEADLINE the Friday night of the Beacons festival – and as we were the last act of the evening in the only tent left open, I feel I can declare this statement technically accurate. Look, we’ve even got an appropriately surrealistic picture by the great Matt Colquhoun to prove it:

Howlround at Beacons by Matt Colquhoun

As some of you will be aware, the specific nature of a Howlround performance often requires having my back to the crowd; but my spies cunningly placed among the festival-goers in attendance have revealed that the reception to our set fell into three broad categories – a small but noble group who were enchanted, a slightly larger group who were rather baffled and a very small group of one who was actually quite outraged. This is all to the good – the last thing anybody wants to inspire is indifference. My favourite comments so far have included ‘brilliant’, ‘strangely remedial’, ‘eerie as f**k’ and ‘is this supposed to be an act?’, all of which I’m hoping to fit on the sticker attached to our next LP.  Why not have a listen to this brief extract and send me your own three-word review? I’ll print the best ones!

From my own perspective, our set was not without it’s challenges, particularly as our new UHER reporter machines were proving a little impetuous and uncooperative. But of course that element of risk and the chance that it might all implode at any moment is a key factor in Howlround’s live performances – the frequent bouts of frantic loop un-tangling, bursts of unexplained noise and sudden huge silences should always be considered part of the experience. Allowing this margin for error, failure or perhaps even outright disaster is what gives the performance an extra frisson. Not that this is the easiest thing to explain to a crowd of mashed-up ravers who have spent the last few hours ‘going hard’ in the Resident Advisor tent. As it were…

Our thanks once again must go to John and Glenn from the Octopus Collective for inviting us and being the entertaining and fascinating company they always are. One of my personal highlights from the festival was Glenn’s Bread Board Orchestra workshop, which turned several large groups of random strangers into chopstick-wielding band-mates, jamming for hours and making a wonderful racket – like a Tescos-powered Gamelan ensemble. I’m hoping they’ll put some of the recordings on-line at some point so I can share them with you. Naturally Chris and I had to have a go. Followed by another. And another…

Other favourite moments included Dām-Funk‘s vocoder-keytar jams (deserving a far higher billing), Special Request‘s house set suddenly ramping into an hour of glorious, teeth-grinding jungle, an extended tea and cake session with our old mucker Jonny Mugwump and Jez Riley-French treating me to a personal performance of his hydrophone recordings (it was very early in the morning and I was the only other person in the tent). Even the appalling weather was not without it’s comedy value, particularly when Chris got whacked and nearly blown over by a flying sign-post warning him to expect high winds. Who says Mother Nature doesn’t have a sense of humour?

Up next is Cafe 4′ 33″ in Barcelona on August 22nd. We’re hoping for slightly less rain.

Howlround MK2 – Into The Woods We Go

Howlround are very proud and excited to announce that our first gig for several months (and our last UK gig for 2014) will occur this weekend in the ‘Into The Woods’ tent, at the Beacons Festival, Skipton, Yorkshire. And it’s a particularly special one for us as it marks the debut outing for our vastly more portable new live soundsystem!

With our recently-acquired quartet of (comparatively) lightweight ‘reporter’-style machines, we’re hoping to massively increase our range and effectiveness as a live unit while massively decreasing the risk of damage to our spines, our heavy-yet fragile Revoxes and the walls and door-ways of my flat. From henceforth the plan is that these much-smaller UHERs will take on our live duties while the Revoxes remain permanently set-up in the Howlround studio, which will hopefully save lots of endless rigging and de-rigging every time we perform and increase our productivity by a factor of hundreds.

Working with tape is never that simple, of course, and it’s entirely unlikely to prove plain sailing:  these new machines run at a much slower speed, half that of the PR99s, which has meant some frantic work re-dubbing and cutting new loops over the past week. We also haven’t had time to properly put our new quartet through its paces yet, or monitor it’s effectiveness ‘in the field’ – going by past experience there’s always that slight chance that they’ll take umbrage with the atmospheric conditions, the country air or the position of the moon. However, I’ve no doubt that such unpredictability will add an extra extra frisson to our ‘witching hour’ live set, which will occur in the small hours of Saturday morning. And of course we will be testing the machines in an actual field…

We thought we’d treat ourselves to a new Avatar!

Thanks to our friends The Octopus Collective of Barrow-in-Furness for once again asking us to perform. And as ever there’s a superb line-up of performances, films and other happenings to enjoy; including The Aleph, Ex-Easter Island Head, Jez Riley-French and the brilliantly named Shatner’s Bassoon amongst many others. Further details can be found here.

And just look who’s back in town:

Howlround Chris arrives just in time to admire our brand new selection of loops – all taken from a forthcoming release!