Radiophrenia – How It Is

Very pleased to announce the launch today of Radiophrenia, an art radio station broadcasting live on 87.9FM for one week only (13th-19th April) to Glasgow and the surrounding areas, also streaming worldwide via Radiophrenia.scot. Curated by Mark Vernon and Barry Burns and with a programme of several hundred exclusive and original radiophonic works, including contributions from Octopus Collective alumni John Hall and Felix Kubin, Jez Butler, The Resonance Radio Orchestra and many, many more. My own submissions include another collaboration with the brilliant Leila Peacock and a brand new tape-composition using a recording of a New Broadcasting House microphone with a squeaking cradle. You’ll have to tune in to hear them in full of course, but magnanimous fellow that I am,  I’ve included a sneak preview:

The schedule can be perused here and you can also follow the latest updates on Twitter. I’m predicting that I shall be listening to this a lot over the coming days, partly owing the relentlessly high-calibre of people involved, but also to attain some respite from heroically supervising the packing of thousands of records into boxes. But that’s for another time…

Another recent collaboration that I can finally reveal is Michael Garrad‘s entry to the Kings College Creative Responses to Modernism competition, a dramatized extract from Samuel Beckett’s 1961 novel How It Is. Barry Ward provides the voice and I provide the soundtrack. The results are as relentless and visceral as anything I’ve been involved with to date, and it’s about as intense and bleakly thrilling (or thrillingly bleak) as anything the great man ever wrote.

This recording is interested modernism’s concept of making it new and conversely how outmoded techniques can evoke the futuristic and etherial. A squeaking drawer is the source for the electronic sound, recorded and manipulated on ancient quarter-inch tape machines, extracting hidden sound. The reading is monotone, breathless and the digital recording eliminates dynamic with harsh sibilance, distortion and extreme compression.

I can’t claim to be much of a Beckett scholar, though from my own perspective he made a huge contribution to radiophonic drama with works such as pioneering radio play All The Fall in 1957. It’s said that he was hugely influenced by the creative possibilities of then-nascent reel-to-reel technology, a fascination that manifests itself most obviously in works such as the quietly horrific Krapp’s Last Tape. And on a more personal note, I have a print of the Beckett quote ‘Fail again, fail better’ blu-tacked to the wall of my studio next to the mixing desk. It’s been a constant source of solace, as anyone who invests their career and general happiness in the functioning of a number of broken down and erratic tape machines will be able to readily imagine. Hand-painted by Sarah Tanat Jones as a reward to donors to her recent Kickstarter campaign, it’s a quote I first read on the back of a Peanuts calendar, of all things, a surprisingly deep nugget of wisdom compared to the previous day’s entry – ‘take snacks on long road trips to avoid having to buy them’.

In the selection from How It Is, the narrator, static in an abstract land of mud, has a lucid moment, reminiscing of ‘life above’ with his wife, whose death torments him. The piece crosses futures and pasts, warmth and harshness, and in its form exists out of body, place and time.

It’s another rather hurried post from me, unfortunately, as I must return to my frantic box-related activities. But hopefully these two and the promise of many Glaswegian radiophonic delights for the week ahead will keep you sated until THIS happens:

Thanks to everyone who came to see us HEADLINE the Friday night of the Beacons festival – and as we were the last act of the evening in the only tent left open, I feel I can declare this statement technically accurate. Look, we’ve even got an appropriately surrealistic picture by the great Matt Colquhoun to prove it:

Howlround at Beacons by Matt Colquhoun

As some of you will be aware, the specific nature of a Howlround performance often requires having my back to the crowd; but my spies cunningly placed among the festival-goers in attendance have revealed that the reception to our set fell into three broad categories – a small but noble group who were enchanted, a slightly larger group who were rather baffled and a very small group of one who was actually quite outraged. This is all to the good – the last thing anybody wants to inspire is indifference. My favourite comments so far have included ‘brilliant’, ‘strangely remedial’, ‘eerie as f**k’ and ‘is this supposed to be an act?’, all of which I’m hoping to fit on the sticker attached to our next LP.  Why not have a listen to this brief extract and send me your own three-word review? I’ll print the best ones!

From my own perspective, our set was not without it’s challenges, particularly as our new UHER reporter machines were proving a little impetuous and uncooperative. But of course that element of risk and the chance that it might all implode at any moment is a key factor in Howlround’s live performances – the frequent bouts of frantic loop un-tangling, bursts of unexplained noise and sudden huge silences should always be considered part of the experience. Allowing this margin for error, failure or perhaps even outright disaster is what gives the performance an extra frisson. Not that this is the easiest thing to explain to a crowd of mashed-up ravers who have spent the last few hours ‘going hard’ in the Resident Advisor tent. As it were… 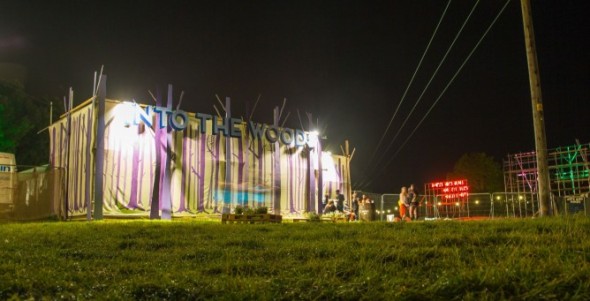 Our thanks once again must go to John and Glenn from the Octopus Collective for inviting us and being the entertaining and fascinating company they always are. One of my personal highlights from the festival was Glenn’s Bread Board Orchestra workshop, which turned several large groups of random strangers into chopstick-wielding band-mates, jamming for hours and making a wonderful racket – like a Tescos-powered Gamelan ensemble. I’m hoping they’ll put some of the recordings on-line at some point so I can share them with you. Naturally Chris and I had to have a go. Followed by another. And another…

Other favourite moments included Dām-Funk‘s vocoder-keytar jams (deserving a far higher billing), Special Request‘s house set suddenly ramping into an hour of glorious, teeth-grinding jungle, an extended tea and cake session with our old mucker Jonny Mugwump and Jez Riley-French treating me to a personal performance of his hydrophone recordings (it was very early in the morning and I was the only other person in the tent). Even the appalling weather was not without it’s comedy value, particularly when Chris got whacked and nearly blown over by a flying sign-post warning him to expect high winds. Who says Mother Nature doesn’t have a sense of humour?

Up next is Cafe 4′ 33″ in Barcelona on August 22nd. We’re hoping for slightly less rain.

Howlround MK2 – Into The Woods We Go

Howlround are very proud and excited to announce that our first gig for several months (and our last UK gig for 2014) will occur this weekend in the ‘Into The Woods’ tent, at the Beacons Festival, Skipton, Yorkshire. And it’s a particularly special one for us as it marks the debut outing for our vastly more portable new live soundsystem!

With our recently-acquired quartet of (comparatively) lightweight ‘reporter’-style machines, we’re hoping to massively increase our range and effectiveness as a live unit while massively decreasing the risk of damage to our spines, our heavy-yet fragile Revoxes and the walls and door-ways of my flat. From henceforth the plan is that these much-smaller UHERs will take on our live duties while the Revoxes remain permanently set-up in the Howlround studio, which will hopefully save lots of endless rigging and de-rigging every time we perform and increase our productivity by a factor of hundreds.

Working with tape is never that simple, of course, and it’s entirely unlikely to prove plain sailing:  these new machines run at a much slower speed, half that of the PR99s, which has meant some frantic work re-dubbing and cutting new loops over the past week. We also haven’t had time to properly put our new quartet through its paces yet, or monitor it’s effectiveness ‘in the field’ – going by past experience there’s always that slight chance that they’ll take umbrage with the atmospheric conditions, the country air or the position of the moon. However, I’ve no doubt that such unpredictability will add an extra extra frisson to our ‘witching hour’ live set, which will occur in the small hours of Saturday morning. And of course we will be testing the machines in an actual field…

We thought we’d treat ourselves to a new Avatar!

Thanks to our friends The Octopus Collective of Barrow-in-Furness for once again asking us to perform. And as ever there’s a superb line-up of performances, films and other happenings to enjoy; including The Aleph, Ex-Easter Island Head, Jez Riley-French and the brilliantly named Shatner’s Bassoon amongst many others. Further details can be found here.

And just look who’s back in town:

Howlround Chris arrives just in time to admire our brand new selection of loops – all taken from a forthcoming release!