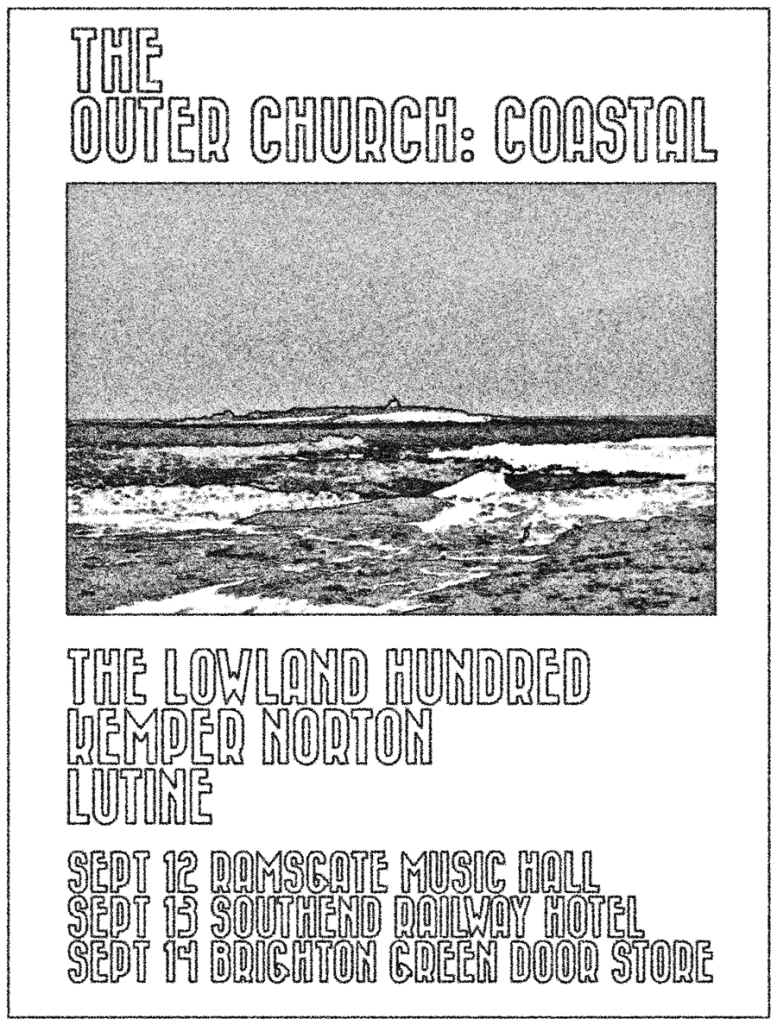 After last week’s possibly-miraculous Outer Church-related coincidence in Barcelona, and as perhaps some kind of cosmic riposte to my comments about the potential alignment of the planets in contributing to it, I’m rather sorry to report that church overlord Mr. Joseph Stannard has booked a three-date coastal tour of the UK at the precise moment when I’m not in the country to enjoy it. Cosmically bad luck on my part, particularly with such a jolly fine line-up.  Might I respectfully suggest you partake in my stead? Further details here. Further details with the added social networking benefits of Facebook here.

Seriously, I am very sorry I won’t be there. The last night is at Brighton’s Green Door Store and it seems only yesterday that Howlround were there doing a turn of our own at the Outer Church compilation launch. Happy days, eh Chris?

Must dash, am off on a sonic adventure to the US to chase ghost towns and desert songs. My first stop after the airport will be the nearest branch of Radio Shack to buy an adaptor for my contact mic, which I’m hoping to dangle off a few monuments. Perhaps I should wear my Outer Church T-shirt while doing so and see who else I bump into?

You might think that taking over a week to upload some sound and images to these pages from Howlround‘s triumphant gig at 4’33” Café in Barcelona is a rather shoddy way to run a website. And I’d be inclined to agree with you, while letting slip the fact that since we returned I still haven’t got round to the necessary but highly-tedious task of untangling the huge pile of tape loops that were hurriedly scooped off the floor at the close of the performance, our de-rigging having been made all the more urgent by the promise of some impending late-night tapas. And the fact that I still haven’t done any laundry. But in truth, it’s been another busy week. I’m heading off to the US in a few days, hoping to find fresh inspiration recording desert ghost towns and other haunted spaces, so I’ve been trying hard to wrap up all of my various affairs before I go. I’ve also spent a considerable amount of time swearing at Photoshop while fiddling with the cover artwork for a new Howlround release scheduled for the autumn, but more on that at a later date.

What is rather shoddy, however, is leaving it this long to give huge thanks and gratitude to JP and Ale of 4’33” Café for being such fantastic, supportive and entertaining hosts (and for taking the above photos), to Robert and the Base Elements Gallery for allowing us to perform in their magnificent 12th century basement in the Gothic quarter; and also to our many new friends in the large and enthusiastic crowd who gave us such a huge reception – our set met with an ovation and our first ever encore!

Speaking of which, perhaps the strangest moment of the entire trip occurred a few hours before the show as we were returning to our B&B in the Montjuic district to pick up our gear. Walking up the road towards our lodgings, we were suddenly stopped in the street by a lady who pointed at the Outer Church T-shirt I was wearing and asked ‘Are you Robin?’ Despite the enormously high profile I enjoy from years of art radio broadcasting, DJ-ing between bands and creating obscure sound art, it’s still a surprisingly rare thing for me to be recognised in the street, particularly when that street is in a city I last visited on a school art trip at the age of 16. But then this interloper was no ordinary lady – it was Rosa Arutti, local musician, sound artist, part of the rather super Nad Spiro and subsequent gig attendee. I guess you could call this a tribute to the enduring influence of Mr. Joseph Stannard‘s great institution and to the power of T-shirt sloganeering. But even so, I wonder what kind of crazy alignment the planets must have been in to allow this chance meeting in a small side-street in a strange city at the very door of our bed & breakfast? How does Rosa herself account for this amazing coincidence?

‘Well,’ she commented in a subsequent email, ‘they say Montjuic is the magic hill. I think I’m going to get myself an Outer Church t-shirt !’

Nad Spiro have something of the magic about them too. Check out this recent album:

Before we left, JP and Ale also took some time to show us around the site for their new venue, currently under construction, which they intend to open as Barcelona’s answer to our own Cafe Oto here in London. The prospect of such a venue opening and what it might offer to the city is a most enticing one, as is the hope of being able to accept their invitation to come back and perform there once  it does so!

In other news, I noticed while flipping through the latest issue of The Wire on the plane over that I get a mention in their charts page – another minor ambition fulfilled with thanks to The Geography Trip! Incidentally, if you haven’t bought their latest release by The Resource Centre yet, you jolly well ought to go and do that now – it’s a quiet marvel and is apparently recommended ‘for fans of Terry Riley, birdwatching, John Cage, that warm feeling you get when remembering your first school and Music concrete’; which I imagine will tick plenty of your boxes too. I can’t find that much coverage of this splendid label anywhere else online, which is rather an oversight on the part of the internet.

As for the immediate future, Chris has returned to Dubai to continue his residency (which appears to be going really well – you can keep up to date with his exploits on his own blog here) and I’m going to be packing my trusty Edirol and an 8GB flashcard in my hand-baggage and hoping for some fresh audio adventures in California in the coming week (but no earthquakes, please).  Work on our next release(s?) will continue remotely, though our original plan of sending demos to one another via tape spools in the post has been abandoned for the far more economical benefits of We Transfer. It’s much less romantic but infinitely more practical and I guarantee you won’t be able to spot the difference.

It was great to have Chris back, though, and what an amazing month we had. And, once again, how lucky we are to have so many good friends who support what we do. And to have friends who make nice T-shirts. Glad to know them all!