Now that the dust has settled, please take a moment to enjoy some sights and sounds from last week’s Saisonscape: Decay tour, where Howlround played a trio of dates across the UK alongside the great sound artist and tape-loop manipulator Mr. William Basinski and recent Quantum Natives signing Kepla. The video and images shown here were from the final night of the tour at The Kazimier in Liverpool, which was perhaps the most visually impressive of the three, with the loops teetering and wobbling upwards from the stage and disappearing over the balcony. It’s a miracle the whole thing held together at all, quite frankly, even with all the scaffolding parts and other heavy metallic items lying about backstage that we borrowed to stop the tape jumping off the spools…

My enormous gratitude must go to Art Assembly, in particular the amazing Julia Dempsey, as well as Messers Basinski and Kepla for being such affable and entertaining touring companions, not forgetting Victoria Hastings for doing such a fantastic job of documenting the whole thing. More photos to follow, no doubt, but I think it’s this one that makes me the most proud:

Must also thank everyone at The Kazimier as well as Cafe Oto in London and Salford’s Islington Mill for their warm welcome. I haven’t had a moment to go through all the recordings yet, but doubtless more audio from these events will surface before long. The response from the crowd each night was hugely encouraging and bodes well for the imminent release of our new album…. but more on that later! 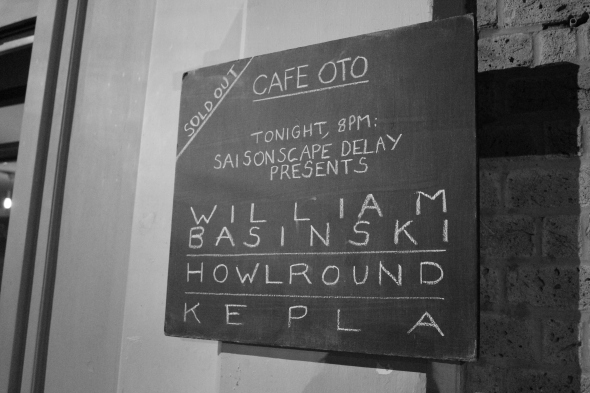 Into The Freakier Zone: Nocturnal Transmissions From The House Of Howl

Howlround back in the lab for one final stab at finishing the new LP. This Vine video uploaded by Chris during the session (he has a smartphone!) caused much excitement on Twitter over the weekend, so I thought you might appreciate a re-appraisal. Look closely and you’ll count four machines in use simultaneously, with tension and restraint being provided in the absence of a mic stand by Buddah (which is oddly appropriate), the handlebars of my bike, a pint glass full of batteries and small change; and of course my ‘Stockhausen Syndrome’ mug, which is probably the single funniest object I own…

A number of surprisingly effusive people have already contacted us enquiring just what kind of composition were we cooking up with such a glorious tangle of tape and when they would be able to hear the results? Well, sooner than you might think as it happens as I shall be doing a turn on Stuart Maconie’s Freakier Zone on BBC Radio 6 Music this coming Saturday evening. We’ll be discussing the relationship between music and foley, which is of course PURE HOWLROUND TERRITORY, so I’ll be playing some selections from our catalogue including an extract from this latest work-in-progress, as well as examples of some of my favourite ‘composed sound effects’ from the great Radiophonicists of the past. There might even be something from the forthcoming Howlround album! Join us there, won’t you?