Viseu’s ‘Praça D. Duarte’ at the height of festivities. The Funerária D. Duarte where we staged our sound installation is second-from-right.

Now that the dust has settled, Howlround would like to say a huge thank you to everyone who attended both our performance and sound installation as part of the Jardins Efémeros Festival and also to everyone who helped in making it come to pass. There are far too many people to name individually, but particular gratitude must go to Sandras Oliverira and Rodrigues, Filipe Oliveira, Lino Ferreira, Jose Cruzio, the staff of both the Nacional Museum Grão Vasco and the Funerária D. Duarte and of course the ever-resourceful sound engineers Cristóvão Cunha and José Marques for putting up with our myriad of strange demands! And of course to Rui Miguel Abreu for kick-starting our participation in the whole affair – we owe all of these people several beers and will do our best to make good on this at some point. It was certainly one of our most memorable performances both for location, attendance, reception and dramatic incident – though thankfully poor Delia now seems to have recovered! Here’s a brief extract again in case you missed it: 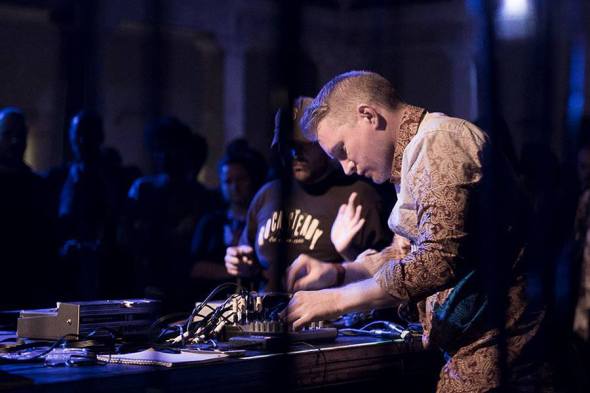 We’re thinking of incorporating a glitterball into all future Howlround performances!

And what a magnificent festival it’s been, encompassing performances, installations, workshops, sculptures, exhibits and DJs that took over the whole town, attracting both young and old, local and international. Unfortunately, the preparation of our own works required much squirrelling away in the backroom of our temporary studio-cum-abandoned-tie-shop and missing some fine work as a result, but we did our best to catch up where possible. Pye Corner Audio (the only other UK act on the bill) and Not Waving‘s joint set was predictably awesome but there were plenty of new personal discoveries too including supercharged garage punk from Dirty Coal Train plus ethereally brilliant solo sets from Johnathan Saldanha and Hysterical One Man Orchestra, both of HHY & The Macumbas. To our great regret we missed their group’s collective performance due to being locked in the museum (and who hasn’t had that happen to them at some point?), but made up for it with Lybomyr Melnyk‘s lengthy, dexterous and evocative solo piano works in the splendour of Viseu’s 16th Century Cathedral, not to mention Barcelona’s Eli Gras incorporating sound toys and bizarre home-made instruments into a set that had all the infectious enthusiasm of a kid in a sonic sweet shop. Away from the live music, DJ Sonido Tupinamba dropping some Yma Sumac and Martin Denny in the town square was a perfect backdrop to a restorative afternoon beverage and I really should also thank that one bar (the name of which escapes me) that both allowed and encouraged me to spin Oldskool Hip Hop on a borrowed laptop. Fun times, but there’s so much that I’ve left out! 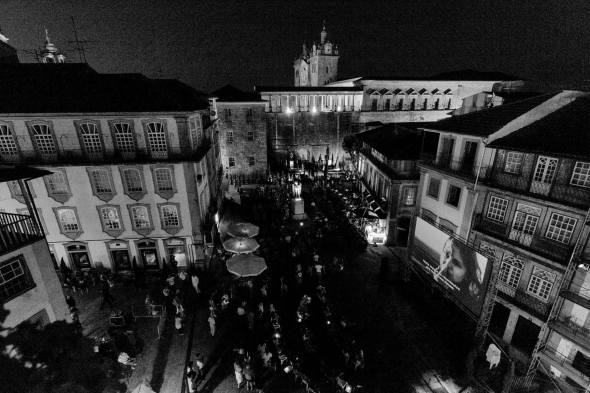 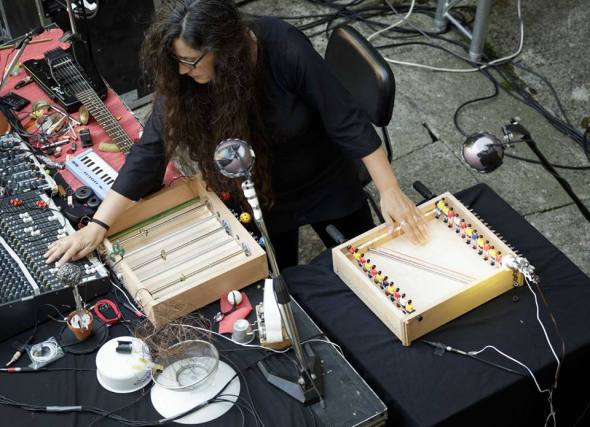 Eli Gras tears it up. She built all of these instruments herself and they sounded as amazing as they looked. 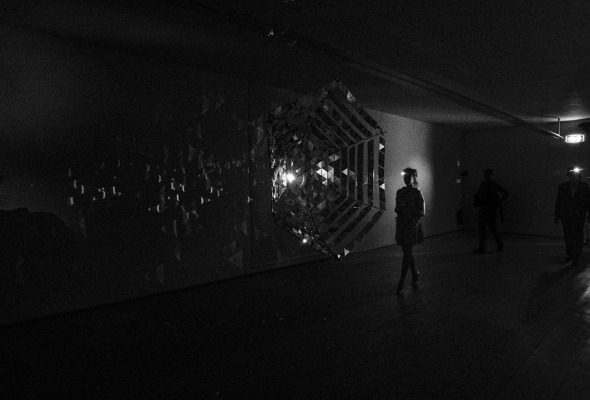 Anita Ackermann’s ‘In The Light Of Movement’ installation. Head-torches a must.

Sadly the festival (including our sound installation at the Funerária) ends this weekend, but if you’re in the vicinity there’s still plenty to see before the curtain comes down and the gardens themselves are cleared away on Sunday night. Our thanks go once again to festival curator, organiser, lynchpin and hardest working woman in Portugal, Sandra Oliveira, for putting the whole thing together and not sleeping for days. We’re hoping you get to have a holiday at some point – and that you’ll let us come back next time!

Sandra Oliveira with requisite head-torch. I think the other chap might be the Mayor.

A rather hurried post at the culmination of a manic week preparing for our sound installation and performance for the Jardins Efémeros Festival in Viseu, Portugal. A more considered write-up will doubtless be forthcoming, but for now I thought you might enjoy these images and this extract from last night’s set in the magnificent C15th cloister of the Nacional Museum Grão Vasco – our first ever open-air performance!

Thankfully the intense heat combined with a slight breeze that threatened to blow our tape loops around had calmed by the time of our 23.30 performance, though the evening was not without its dramatic moments, including a significant chunk of our set in which our reel-to-reel machine ‘Delia’ appeared to give up the ghost completely. For added intrigue, it just so happens that our performance occurred on the 14th anniversary of the death of her Radiophonic namesake. I’m not a superstitious man, but I’m pretty certain there’s some symbolism at work in there somewhere. Thankfully she clicked back into life after some tense moments and a lot of silent pleading and is now recuperating in our surprisingly plush hotel:

Away from the stage, our sound installation at the Funerária D. Duarte runs throughout the festival and thanks must go to the staff for being so obliging in allowing us free play among the coffins in the back room.

The work itself is some twenty-seven minutes in total and consists of the Funerária staff (all members of the same family) talking about their work mixed in with a soundscape of Viseu using recordings gathered from local abandoned buildings and subjected to the patented Howlround treatment at our temporary studio in the back room of a former tie shop. Our favourite piece of feedback so far has got to be a reported  ‘Mummy, where are all the dinosaurs?’

Jardins Efémeros runs until 12th July and it’s proving to be a remarkable achievement, quite literally transforming the town. Our gratitude must of course go to festival curator and lynchpin Sandra Oliveira, our translator Lino and all our new friends for being so welcoming and supportive. We’ve been so busy preparing for our own contributions since our arrival last week that we haven’t actually had time to check out much of the festival yet, but one thing that particularly captured my own imagination during a brief tea-break was Vanda Rodrigues‘ ‘Cloud Room’, stepping into which felt like entering a Boards Of Canada video! 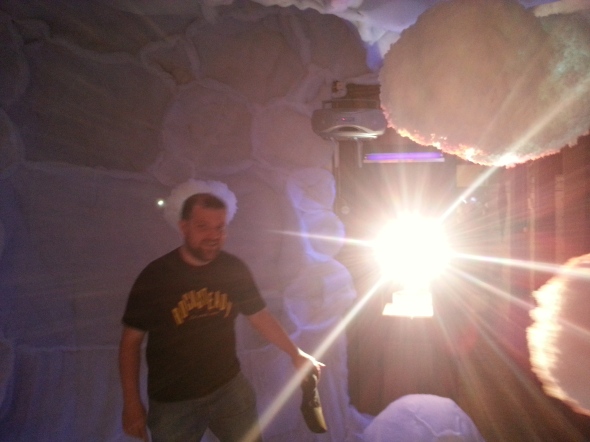 Howlround will be performing as part of this year’s Jardins Efémeros Festival (or ‘Ephemeral Gardens’) in Viseu, Portugal on July 3rd at the Nacional Museum Grão Vasco. We’ll also be producing a sound installation in a funeral parlour! Click on the image below for more details and the full festival line-sup can be downloaded as a PDF here. Further sounds and images to follow – plus Pye Corner Audio and Holly Herndon are playing too! Hurrah!

It’s the first event in what is shaping up to be quite a busy summer for Daphne, Delia, Magdalena and Elisabeth, our quartet of sprightly though occasionally wonky reel-to-reel machines. So busy in fact, that I thought it might be an idea to embody it in poster form:

In the meantime, thanks to everyone who came to Speak No Evil‘s ‘Light And Shadow Salon’  last Thursday and to the staff of New River Studios for going above and beyond the call of duty to ensure that our quartet of tape machines got home safely (it’s a long story). Great new venue, hopefully we’ll be invited back soon. I was intending to post an extract here from this first Howlround performance since that Barcelona basement last summer, but unfortunately due to a technical glitch I’m currently unable to do so. However the entire event was being simultaneously broadcast on Sonica.FM, so with a bit of luck we might be able to work something out. Thanks to everyone who came up and told us how much they had enjoyed our set, but for added amusement I shall leave with you with the unsolicited advice offered by an older gentleman in the audience who, after observing us conjuring a mass of howls, shrieks and clanks from our quartet of elderly reel-to-reel machines and a vast tangle of ageing, twisted tape, remarked that our live set needed to be a bit ‘slicker’ and ‘more professional’ if we were going to get anywhere. I thanked him and suggested he check out our alternative website http://www.spectacularlyandheroicallymissinghepointofthewholedamnedenterprise.com