…And to think until today I’d never heard a recording of my thumb amplified through the public address system of major exhibition venue!

It’s been a busy old week at Fog Towers since my return from Copenhagen, culminating in a morning spent wandering around the famous Kensington Olympia with some contact microphones looking for some hidden sounds to record. Currently in-between exhibitions and deserted save for a small army of cleaning and maintenance staff, I was lucky enough to be given full access to this enormous exhibition centre, including its surprisingly loud PA system. The reason for all this will be unveiled next month when I’m planning to return to the building to present the results of my audio adventures. For the moment I’ll just let it be known that playing the sounds of doors creaking, glass being rubbed and the ascension of a scissor-lift back into the cavernous main hall at high volume while staff continue their work undaunted was about the most fun it’s possible to have before lunchtime. Like being given the keys to an enormous empty toyshop…

In other news, here’s what the next Howlround album sounds like:

Following a flying visit to Veneration Music‘s studio in deepest, darkest Kent, I’m very excited to be able to reveal this first glimpse of our next LP – quite literally. It has a title, cover artwork and, thanks to the nurturing hands of genius mastering engineer James Edward Barker, is now primped, polished and ready to go. As with our previous album, the services of this most talented musician/producer/polymath was largely paid for in Butterscotch flavour Angel Delight – a very reasonable price for a chap who’s just been working with Bruce Willis. We’re very excited about it all, but for the moment this enigmatic glimpse of the audio files is all you’re getting! Hoping for a November release, but you know how these things have a tendency to get held up…

On the same subject, you might remember me harping on about Howlround’s first ever music video few weeks back. Why not watch it again? It’s very good but I need to get the play-count up:

I mention it here again because the charity compilation album XPYLON from which this track (a collaboration with Ray Carmen’s abandoned playground) was taken is finally out and available in all it’s 16-exclusive-track glory. As well as benefiting a good cause, it’s also a tribute to Jonny Mugwump’s erstwhile Exotic Pylon record label and radio show,  and the stellar line-up below is the perfect testament to his legacy. All original and exclusive material and it’s a ‘name your price‘ release, which means you simply pay what you think it’s worth – but as 100% of all proceeds are being donated to mental health charity ‘MIND‘, a generous donation is always appreciated.

But don’t just take my word as to its quality, a rather flattering review courtesy of Jim Haynes has surfaced in this month’s Wire magazine:

Now that the album has been released, I’m suddenly reminded that I actually feature on the album twice, firstly in my capacity representing Howlround and secondly as one third of new super-group The Trunchbulls, alongside Band Of Holy Joy lynchpin Johny Brown (who wrote the tremendously eerie accompanying text) and Exotic Pylon legend Dolly Dolly (who spoke it and did the eerily tremendous job one might expect after listening to his 2013 album Antimacassar). Anyway, put it down to a busy work-load, to concentrating over-hard on finishing off the aforementioned Howlround long-player or just encroaching senility, but somehow the memory of working alongside these two excellent fellows and the resulting ‘polyglot of Derbyshire-esque Radiophonics’ (thanks Jim!) slipped to the bottom of my mental pile. I’d better post it up here before it slips my mind again:

One thing I haven’t forgotten is Jez Butler‘s superb A Lighter Side Of Concrete from a year or so ago. Heavily influenced by the work of  twang-a-ruler-and-make-a-bassline-out-of-it Radiophonic Workshop legend John Baker, it’s an album of decidedly chirpy concrete-pop that I still feel has been rather unfairly slept on. Well, his latest release as part of the Twelve Hour Foundation with partner Polly Hulse is out now on a limited edition three-track 7″ and it’s really quite marvellous. Continuing the legacy of his solo album, it’s a ridiculously catchy affair that sounds like the theme tune to an early 1980s BBC Schools programme about robots or the periodic table – like something Paddy Kingsland might have cooked up for the greatest-ever episode of Zig-Zag, on a spring morning while enjoying a bourbon. Look, I’m running out of analogies, OK? Just give it a listen already!

And speaking of John Baker, I’m ridiculously over-excited at the imminent release of The Vendetta Tapes on Alan Gubby’sBuried Treasure imprint. Alan worked extensively on the Trunk compilation The Baker Tapes several years ago and I believe these tracks represent a further trove of ultra-rare obscurities from one of the Workshop’s true pioneers: incidental music, theme tunes, jingles and special effects culminating in a delicate balance of sleazy jazz, musique concrete and subtle electronics. I was excited then and I’m excited now, especially as I had confidently assumed that after the Trunk release the trail would have gone cold. After all, the BBC does have a deservedly awful reputation when it comes to preserving it’s own archive – though the recent BFI box set of Out Of The Unknown was most welcome, it served as much to highlight the fact that more than half of the episodes of that series have been lost forever, including stories by Ray Bradbury, Isaac Asmiov and Nigel Kneale – a travesty, quite frankly. Thank heavens for enthusiasts like Alan who manage to get past the bureaucracy and red tape and finally give these treasures an airing! Limited edition and selling fast, don’t sleep on this one:

Well, that’s probably enough to be getting on with. Next week I’m off to York to record the sound of vintage Grandfather Clocks. Busy old summer…

Can you make an albums worth of material from the sounds of a squeaky gate? @RobinTheFog can @StuartMaconie’s guest in Freakier Zone tnight

First off, thanks very much to Stuart Maconie and producer Rebecca Gaskell for allowing me to play records and talk foley on BBC 6Music’s Freakier Zone this week. If you missed it and fancy hearing 100% exclusive extracts from Howlround‘s very-nearly-finished fourth album (including one track so new it had to be hurriedly assembled prior to broadcast) plus personal sound FX selections including the immortal ‘Grotbag’s Cauldon’, you can listen again here. There’s treats aplenty, even if I do say so myself!

Speaking of  exclusive treats, I’d like to hereby present for your approval Howlround‘s first ever promo video and the unveiling of another brand new track ‘OH’, produced in collaboration with abandoned playground aka US musician and fellow tape enthusiast Ray Carmen:

The track is created entirely from microcassette recordings made by Ray in the 1990s – of his infant daughter, chimes in the park and distant train sirens. As soon as we heard them it quickly became apparent that they were crying out for some deep spool action and Ray has very kindly obliged. Some have called the results our finest work yet, or at least our most accessible. I’m happy to go along with either, quite frankly.

Howlround are also very pleased to reveal that an edited version of the above features on a brand new 16-track charity compilation XPYLON, released on August 5th and featuring Kemper Norton, Cindy Talk, Time Attendant, Dolly Dolly, Ekoplekz alter-ego Gloria Gloucestershire and side-projects by members of Hacker Farm and Band Of Holy Joy – all artists released by or associated with the now sadly-defunct record label and radio show Exotic Pylon. 100% of proceeds from the sale of this compilation will be donated to mental health charity Mind, so it’s a worthy cause as well as a thoroughly stimulating listen. Pre-order your copy here.

Incidentally, the compilation also features an exclusive track by The British Space Programme, the latest project by ace music producer and Quiet World label-boss Ian Holloway. The debut BSP album Eyes Turned Skyward is out now and is really rather super. Unfortunately Ian recently had a rather nasty altercation with a flight of stairs, resulting in a horrific-sounding knee-injury, swiftly followed by hospitalisation and surgery, so it looks as if future projects might be somewhat delayed. Thankfully he appears to be on the road to recovery, though justifiably a little miffed with being house-bound. Why not help speed that recovery along by browsing the extensive Quiet World catalogue and perhaps making a purchase or two? Just a thought…

Finally, you might have noticed the ‘OH’ promo video is dedicated to broadcaster, inventor, and polymath Bob Symes, who sadly passed away earlier this year. The reason for this dedication will be immediately apparent to anyone aware of the great man and his work, but I would urge everyone else to take five minutes out of their lives and watch this clip of him in action on BBC TV in the 1970s. Whatever your opinion regarding modified coffee tables, if the sheer, unbridled enthusiasm he shows towards the subject (as for seemingly everything he turned his hand to) doesn’t warm your heart, nothing will. An ‘eye-smiler’ as my flatmate observed when I forced her to sit through it. Or as Bob himself might say, ‘Really remarkable’. Bravo, sir, and RIP. 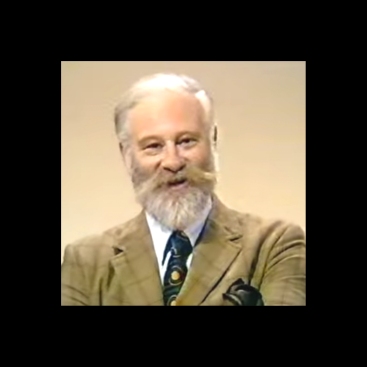